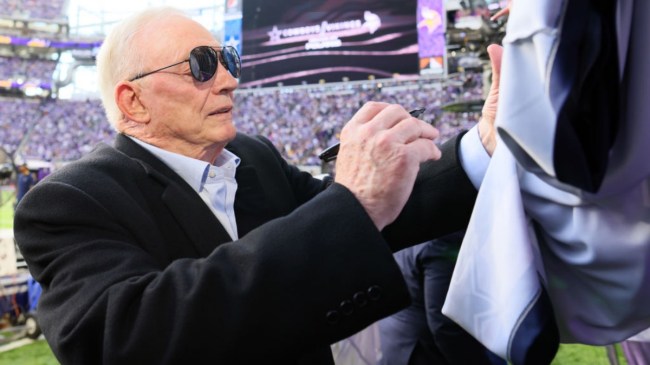 The hype behind a potential return to the football field for Odell Beckham Jr is quickly diminishing.

A week ago, football fans eagerly anticipated Odell’s meetings with the Buffalo Bills, New York Giants, and Dallas Cowboys. In the aftermath of those meetings, fans have been left to wonder if Odell will take the field at all this year.

Over the weekend, it was reported that teams had concerns about Odell’s health as he works his way back from the ACL injury he suffered in the Super Bowl.

Now the owner of one of the teams Odell met with has echoed those concerns.

During his weekly appearance on 105.3 The Fan, Jerry Jones reveals that he isn’t confident about signing Odell.

I’m not confident at all. And, so, that’s the issue. Now, we all realize that issue of health, that issue of availability is here every time. Just this one is very obvious and very pointed toward his injury that occurred last year in the Super Bowl. We got a good bead on that. We got a great read on his career. It’s not like a draft pick coming at you. You got a lot of history here and you can take a good look at, not only the obvious and that’s his performance, but also any issues regarding health. So, all of this we got to come in with our eyes wide open and it has to be addressed, and that’s when you can see if you can make a deal or not

It makes plenty of sense for any team considering signing Odell to be a bit skeptical. They haven’t had the chance to see him take the field even in a practice setting and he wants a pretty big commitment.

Odell’s free agency has now crept into Week 14 and with every passing week it becomes less likely that he’ll be able to have an impact for anybody this season.