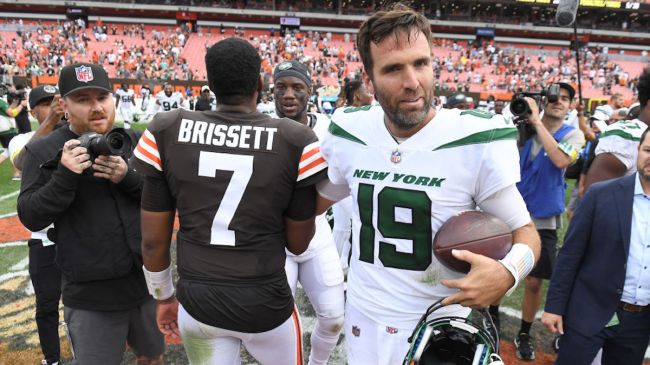 If you’ve ever wondered whether or not some NFL franchises simply have bad karma, allow me to direct you to yesterday’s matchup between the Cleveland Browns and New York Jets.

In an exercise when an unstoppable force of incompetence meets an immovable object of calamity, the New York Jets pulled off a historic comeback against the Cleveland Browns that was likely only possible because of the perpetual black cloud that hangs about the franchise.

In fact, immediately after the mindblowing defeat, some NFL fans wondered if Cleveland’s karma is getting worse because of Deshaun Watson and the way (some) Browns fans have embraced him.

Hilarious Cleveland schadenfreude aside, just how historic was a collapse was this, you ask? Well, the NFL hasn’t seen anything like it in over two decades. Want to take a guess who the last team was to blow a 13-point lead in less than two minutes? Yup, the Brownies.

-The first time the Jets, Jags, and Lions all won on the same day since ‘11

-The first time the New York Jets had won an NFL game in the month of September since 2018.

-The first time Joe Flacco won an NFL game on the road since 2019.

-NFL teams had won “2,229 consecutive games when leading by at least 13 points in the final 2 minutes”, with the last team to blow such a lead being the 2001 Browns.

The Browns don’t have very long to get their minds right ahead of their next game as they’ll be taking on the Pittsburgh Steelers on Thursday night. As for the Jets, with hopeful franchise QB Zach Wilson scheduled to return during Week 4, Flacco is set to start one more game against the Cincinnati Bengals, another of his old AFC North foes.