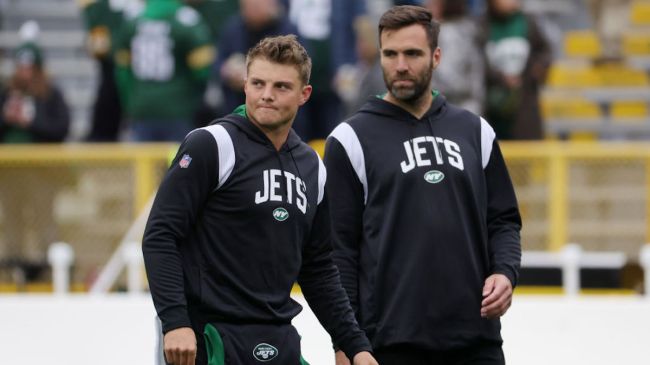 While it was a fun month or so for the New York Jets and their fans, the team came crashing back down to Earth on Sunday as the team not only lost at home to the New England Patriots (their 13th straight loss to the Pats), but quarterback Zach Wilson made an extremely compelling case that he’s not the franchise’s long-term answer at the quarterback position.

Despite Wilson’s shockingly awful three interceptions performance — more concerning than the number of picks was the egregiously careless nature of them — head coach Robert Saleh stepped up to the podium this week and said that, barring injury, Wilson will be the team’s starter for the rest of the season.

The Jets then doubled down on Saleh’s sentiment, as veteran Super Bowl-winning signal-caller Joe Flacco, who started in the Jets’ first three games this season, has been demoted to being third-string QB.

Speaking to reporters about the team’s decision, Flacco — forever a professional — said that while he’s disappointed, he’s not going to be selfish and wants what’s best for the team (take notes, Elijah Moore):

“Of course I was surprised and I’m disappointed about it. But at the same time, got to keep it about the team, try not to be a selfish guy and make my situation any more unique than anybody else’s situation in the locker room,” Flacco said.

The Jets will look to rebound from their disappointing Week 8 loss to the Pats this Sunday against another AFC East divisional rival, the Buffalo Bills, who are perhaps the best team in the National Football League.