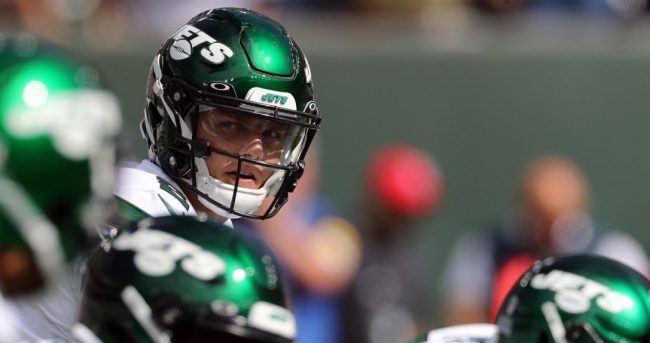 The New York Jets are in the middle of training camp as they prepare for the upcoming season. Many are hopeful for improvement from this team after the front office had a strong offseason. All eyes are on Zach Wilson right now as his development is crucial for the club’s success. However, Robert Saleh made a comment about Joe Flacco that puts the young quarterback on notice.

According to Connor Hughes, the Jets head coach believes that Flacco is a starting-caliber quarterback in the NFL. To be fair, Joe Flacco had a solid career during his time with the Baltimore Ravens and has a Super Bowl ring to show for it. He’s been having a solid camp so far this offseason while Zach Wilson has been the opposite.

“Joe Flacco is a starting quarterback in the NFL,” Saleh on the #Jets vet, who has a really impressive camp.

There is still plenty of time for Wilson to turn things around. It’s very early into training camp right now as the Jets have yet to play their first preseason game. Regardless, Robert Saleh is liking what he’s seeing from Joe Flacco right now. For that reason, New York may view the veteran quarterback as a strong backup option in case Zach Wilson fails to connect the dots.

At the end of the day, the Jets are going to give Wilson every opportunity to succeed. Especially considering how young the roster is right now. There’s nothing wrong with some competition during this portion of the football year, as it’s exactly what Zach Wilson needs to further his development. Keep an eye on this situation though, as Joe Flacco could make enough noise for the coaching staff to consider shortening the leash on Zach Wilson.