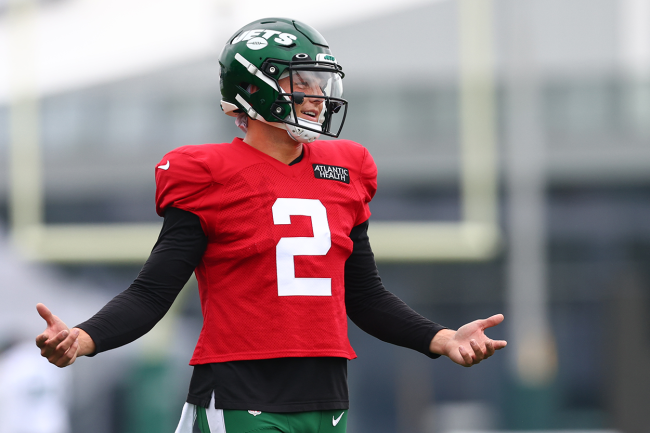 Zach Wilson’s mom Lisa is one of the most exhilarating follows on Instagram. The soon-to-be 50-year-old is very active online and has a brand with nearly 120,000 followers.

Lisa, who has never been one to hold back, often puts rude followers on blast, gives incredible daily pump-up speeches, and is in the process of throwing herself a birthday party to benefit a charity she is passionate about. In addition, she is still involved in the fallout of the juiciest NFL offseason rumor, perhaps ever.

Earlier this year, Zach’s ex-girlfriend who is now dating his former best friend, accused the New York Jets quarterback of sleeping with his mom’s best friend. Although there is no indication as to whether the rumor is true or not, Lisa ruled out one of her “cute” friends as a potential person of interest. She also asked the internet to stop calling her friends, didn’t understand why people were so interested in her family despite the rumor, and blasted the media for stalking her at the gym.

Meanwhile, Zach issued an all-time response to the rumor. His teammates have also joined in on the fun. New Jets tight end C.J. Uzomah wore an incredible shirt to the first day of training camp and many players on the team found a fan’s relatively explicit custom Zach Wilson jersey to be hilarious.

Amidst all of the chaos, Zach has made an executive decision. He is deleting all of his social media so that he can focus on the season ahead of him.

While explaining his decision, the 23-year-old included a jab at his mom. He said that even parents can be a distraction.

ZW: "For me, it just comes down to limiting what voices I really need to hear and, right now, it’s here, hearing what my coaches have to say, what the other QBs have to say, and what my teammates are thinking on every single play. Even parents sometimes can be a distraction.” 🤔 https://t.co/Jlu3vWoWxk

Considering that his mom is as active as she is on Instagram, it was not very subtle.