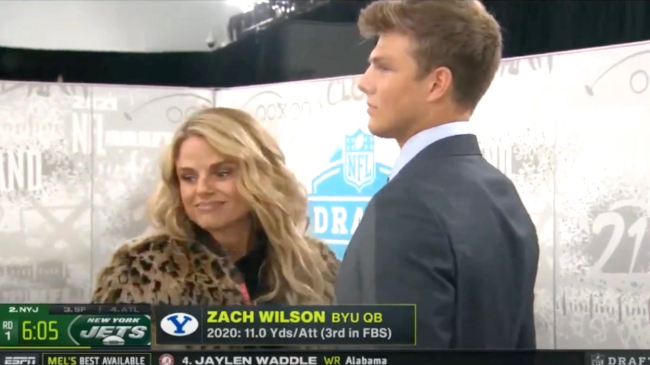 Lisa Wilson, the mother of New York Jets quarterback Zach Wilson, is one of the best follows on Instagram. She is a wealth of content and uses her platform to spread positivity in a world that can often be negative and hateful.

Lisa has never spoken an ill word about someone who has not wronged her first. At least, online.

As someone who has such a prominent platform, Lisa Wilson is often contacted by people who are grateful for the light that she brings to their lives. Her daily pump-up speeches are legendary and she isn’t afraid to stand-up for injustice. Her Instagram profile is full of entertainment and she never fails to keep her followers engaged.

However, Lisa’s most recent take about why the media is so interested in the Wilson family doesn’t really make any sense.

On Tuesday afternoon, she posted the following conversation to her Instagram story: 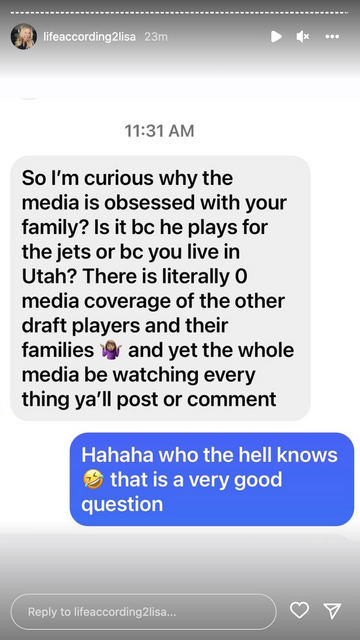 Lisa says that she does not know “why the media is obsessed” with her family. And she said it right in the middle of one of the juciest rumors of the NFL off-season, if not ever.

Zach Wilson’s ex-girlfriend appears to be dating the Jets quarterback’s (likely former) best friend and roommate at BYU. She appeared to be called a “Homie Hopper” on Instagram and seemingly commented back with a wild accusation.

Based on a screenshot that has since gone viral, Wilson’s ex-girlfriend appeared to claim that he once slept with his “moms best friend.” Neither party has spoken publicly about the rumor but she has since deleted her Instagram profile.

And now Lisa is saying that she doesn’t understand why the media is so interested in her family? Now? Amidst the juciest rumor in recent NFL history?

If that question had been raised prior to this past weekend, it might have been more valid.

However, her son is the star quarterback in the biggest media market in the world. It comes with the territory. Lisa even addressed the New York media directly in the past.

In addition, her friend Lisa’s friend that texted her said that “there is literally 0 media coverage of the other draft players and their families,” which is objectively false. Take this timeline of how the Mahomes family became the most insufferable fans in the world as just one example.

And, no matter who the family might be, if there was an accusation made that any NFL quarterback — starter or not — slept with his mom’s best friend or his best friend’s mom, the media would be all over it. So, while Lisa Wilson is typically on-point with the points that she makes about the media and the internet, this one of is completely off.