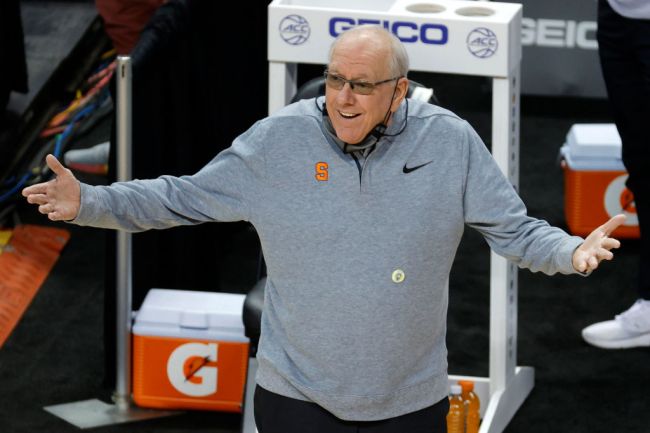 Jim Boeheim and Syracuse’s 2-3 defense are making yet another run in the NCAA Tournament after practically everyone wrote them off. It’s certainly not unfamiliar territory for the Orange to shock the college basketball world after just sneaking into the field, and after dominating San Diego State in the first round and beating West Virginia 75-72 on Sunday to move on to the Sweet Sixteen, it’s not tough to imagine the ‘Cuse pulling off an upset against Houston to advance to the Elite Eight given how well the team has been playing.

The last time Syracuse advanced beyond the Sweet Sixteen came in the 2015-16 season when the Orange moved onto the Final Four. Since then, Syracuse hasn’t finished better than sixth in the ACC and has posted a combined record of 34-23 over the last two regular seasons. Given the regular season form, lack of real threat in the NCAA Tournament, and the Syracuse fanbase being the Syracuse fanbase, the 76-year-old has been on the receiving end of some criticism.

Boeheim was asked about the criticism he’s received following Syracuse’s win over West Virginia and offered up a bit of wisdom while taking a shot at the worldwide web.

“I don’t hear it because they’re from people who are inconsequential. All that stuff on the internet, not one sentence on the Internet matters, not one. When my boss, the athletic director or the chancellor, says something to me, I listen to that. They have not,” Boeheim explained.

“But as far as me worrying about what people out there who don’t support our program probably in any way, they probably don’t come to games or have season tickets, everybody’s entitled to their opinion, but I don’t listen to them. My father taught me a long time ago, you’ve got to do what you think is right, and that’s it. You don’t listen. And if you’re a coach at Syracuse for 45 years, everybody has an opinion about what we should do or shouldn’t do or that we should be better or not.”

On the one hand, you have to tip your cap to Boeheim not caring one bit about what people say about him online. I think anyone in a position like his likes to say they don’t hear the outside noise, but Boeheim’s comments make it sounds like he doesn’t just talk that talk, but walks that walk as well. The only opinion he cares about when it comes to his job is from those that sign his paychecks, which is understandable.

Having said that, ‘not one sentence on the Internet matters,’ is a bit of a stretch. First of all, without the Internet we wouldn’t have caught Boeheim picking his nose and feasting on a booger. That’s important content. Also, if we want to get very literal about his statement, some people make a living by writing sentences on the Internet. Did you ever stop and think about that, Jimbo?

The moral of the story here is we should care less about what people say online in practically every example you can think of, but then again, the Internet and social media is so addicting and already taken over all of our lives that there’s no turning back now. Boeheim beat the movement as 99% of 76-year-olds in the world have, but for the rest of us, the Internet streets rule all.