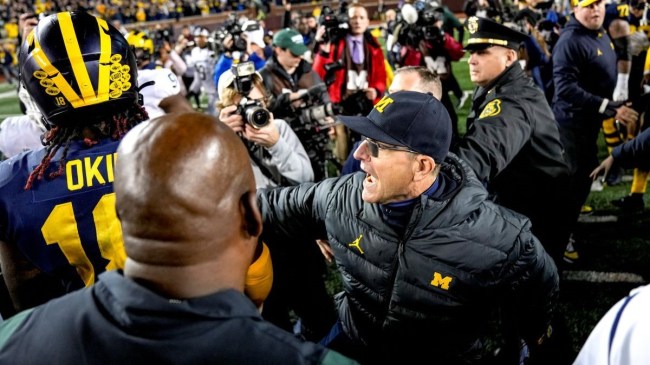 The Michigan-Michigan State rivalry turned ugly on Saturday when a number of Michigan State players appeared to beat down at least two Michigan players in the tunnel after the game.

Penn State coach James Franklin recently warned the Wolverines that this could happen following a recent meeting between the teams. But Michigan coach Jim Harbaugh appeared not to heed those warnings.

Harbaugh spoke to members of the media as part of his weekly press conference on Monday. Unsurprisingly, he addressed the tunnel incident and claimed he knew clearly what he happened. He also claimed that he would be “shocked” if there weren’t serious criminal charges.

Harbaugh says there is ABC tunnel camera footage that shows everything and it’s crystal clear what happened. He’d be shocked if there’s not serious criminal charges. Called it egregious and sickening.

“Right now we have an ongoing police investigation,” Harbaugh said Monday. “What happened in the tunnel was egregious. Sickening to watch the videos, the ones that are on social media right now.”

Harbaugh added that an ABC camera placed in a “higher elevation” shows “much more of what took place” during the incident.

“There needs to be accountability,” he said. “There needs to be a full, thorough, timely investigation. I can’t imagine this will not result in criminal charges. The videos are bad. It’s clear what transpired. This is very open and shut. As they say, watch the tape.

“I’m coming from this from a perspective of being a parent. These young men are entrusted to me by their families and to our program, and we have the responsibility to each player to treat them like our own, and I take that responsibility very seriously. An apology will not get the job done in this instance. There should be serious consequences for the many individuals that are culpable.” – via ESPN

ESPN’s Tom VanHaaren then provided additional details. VanHaaren states that the parents of Gemon Green, one of the Michigan players involved, plan to press charges

I spoke to the father of Gemon Green, the Michigan football player hit with a helmet in the tunnel. He said the family is planning to press charges and take legal action on those involved.

He said Gemon was struck with a helmet in the face, back and shoulder.

Both Michigan and Michigan State police are currently investigating the incident.