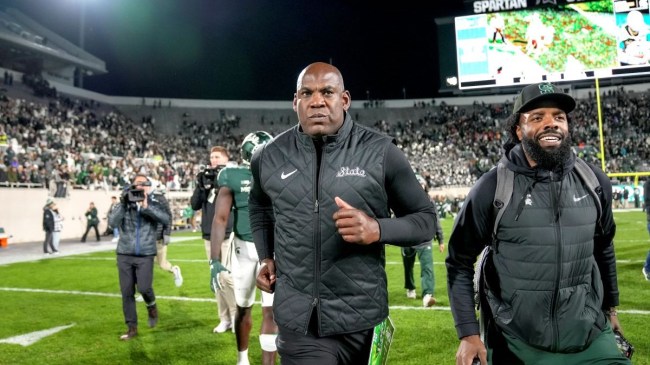 Less than one year after signing a massive, 10-year contract worth $95 million, the shine appears to have worn off Michigan State football coach Mel Tucker.

Tucker led the Spartans to a fantastic 11-2 record in just his second year at the helm in 2021. He also led them to an 8-0 start and a win over rival Michigan that vaulted them to No. 5 in the nation.

But since that win, things have gone off track. Michigan State went just 2-2 in its last four games of the season. That included a loss to Purdue and a 56-7 drubbing at the hands of Ohio State. While the Spartans rebounded to beat a shorthanded Pitt team in the Peach Bowl, the struggles have continued in 2022.

Sparty is just 3-5 in Tucker’s third year and just got by blown out, 29-7, by the rival Wolverines. Though the issues didn’t stop on the field. Following the contest, a number of Michigan State players could be seen assaulting a member of the Michigan team while on the way back to the locker room.

Tucker and the Michigan State athletic department announced the repercussions for those players on Sunday night.

It didn’t take long for the Spartans to step in and bring down the hammer on the players involved in the altercation. The program suspended four players: Tank Brown, Khary Crump, Angelo Grose and Zion Young for an indefinite period of time.

The four players will remain suspended at least until all investigations into the incident are complete.

“We are currently working with law enforcement, Michigan State and Michigan campus leadership, and the Big Ten Conference to further evaluate the events in Ann Arbor. Including, but not limited to, additional student-athlete participation in the altercation and contributing factors,” Tucker said in a statement.

Both Grose and Young have been significant contributors for the Spartans this season. While Brown and Crump have seen limited action.