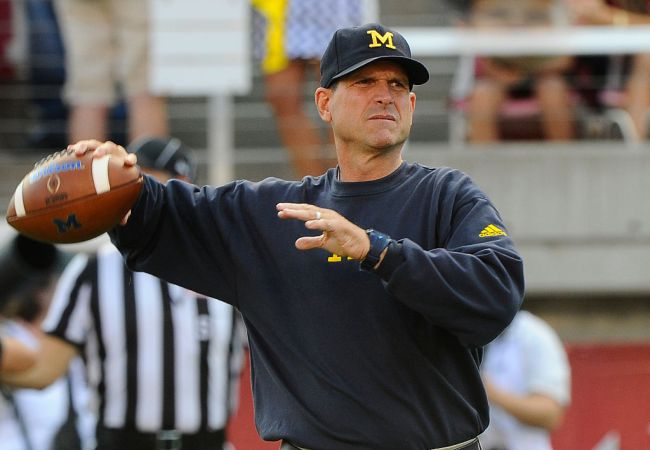 While Michigan’s season is just two weeks old at this point, the November tradition of the football world wondering if Jim Harbaugh will leave Ann Arbor and possibly return to the NFL is alive and well. Given the fact that Michigan is fresh off of a loss against rival Michigan State this past weekend, these rumors and ideas being tossed out about Harbaugh leaving Michigan do have a bit of a different feel to them this year around.

According to Pete Thamel of Yahoo Sports, there is a growing buzz about Harbaugh potentially making a move back to the NFL.

“Buzz is filtering through NFL front offices that Harbaugh is open to return to the league,” Thamel wrote. “And that brings into focus the fascinating question of whether an NFL franchise would be tempted by the duality of Harbaugh’s NFL tenure – a track record of winning that came with significant headaches.”

While the buzz may be out there, Thamel’s source did make it clear in stating that he “just doesn’t hear his name out there anywhere” at the moment and that he would be surprised to see it happen.

Harbaugh has been successful at Michigan with a 48-19 overall record to go along with three 10 win seasons, the problem is, the Wolverines have to play Ohio State every year and Harbaugh has laid an egg against the Buckeyes each time they’ve faced off. He’s also 3-3 against Michigan State, which doesn’t help things either.

When it comes to his track record in the NFL, he has a head coaching record of 44-19, went 1-2 in NFC title games, and lost Super Bowl XLVII in three of his four years manning the 49ers.

The ‘buzz’ will always be there when it comes to Harbaugh returning to the NFL it’s just whether or not a franchise and himself take action. There’s also the rumor out there that Harbaugh maybe has had enough football at this point and that he could leave Michigan and quit coaching the game altogether.