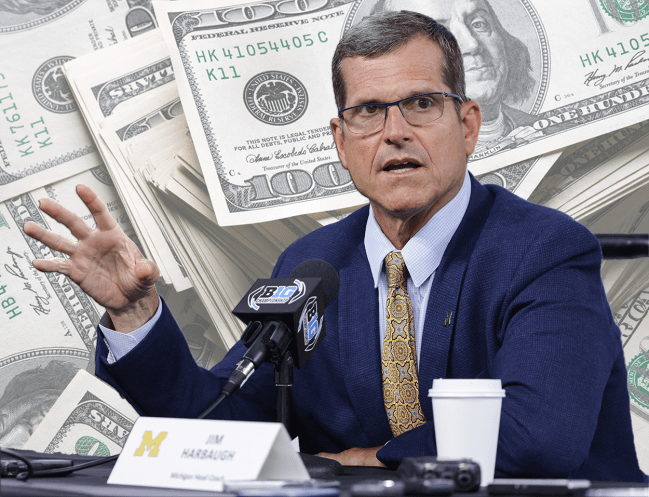 That math is fairly elementary and it has always been the case. Like it or not, money has always played a role in college football and players were being paid prior to the NIL era. Just ask Jimbo Fisher.

What is different now, however, is that the money behind recruiting can be talked about in the open. As a result, the numbers are inflated and there is a greater urgency to raise as much money as possible.

The NIL market in college football is completely unregulated.

Because of the financial element to the transfer portal, programs (through their boosters and collectives) need money. Not only to recruit top high school and transfer portal talent, but also to keep their current rosters in tact. Earlier this year, Ohio State head coach Ryan Day spoke in front of a group of Columbus businesses and bigwigs, and asked them for eight-figure NIL money just to keep the current Buckeyes from leaving.

On Tuesday, at Big Ten Media Days, Day’s rival — Michigan head coach Jim Harbaugh — challenged Wolverines boosters to double that number. He believes that if Ohio State is asking for $13 million, that Michigan can raise $26 million.

Asked about Ryan Day telling boosters that Ohio State needs $13 million in NIL money, Jim Harbaugh says “I think we can do more. I think we can double that at Michigan.”

Harbaugh is not being shy about NIL. He is saying, on the record, that he thinks that Michigan-affiliated boosters and collectives should be raising $26,000,000.

What Harbaugh may also be implying, at least indirectly, is that the Wolverines need more money. He is calling on boosters to pick it up. If Ohio State, his biggest rival, needs $13 million, then he needs equal or greater to compete with the Buckeyes.