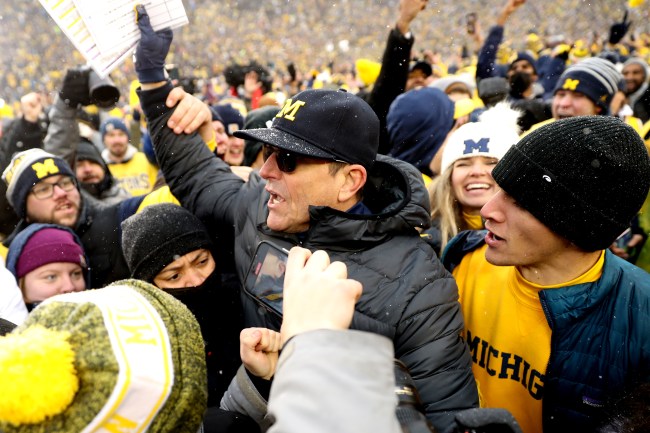 All it took was one win. One win for Jim Harbaugh to start directing some trash talk toward Ohio State. After coaching Michigan to a 42-27 win over the Buckeyes, he wasn’t going to pass up the opportunity to take a shot at rival coach, Ryan Day.

Harbaugh asked if he has thoughts on the trash talking from Ohio State, notably in recent years:

‘Some people were born on third and think they hit a triple.’

Oh my. Harbaugh is back.

After the win, Harbaugh was asked about the years of trash talk he has endured from Ohio State and he was quick to fire a shot at Day.

It is a clear shot at Day taking over an Ohio State program that was already built to succeed. The program was certainly already having success against Harbaugh.

With Urban Meyer as their head coach, Ohio State went 4-0 against Harbaugh’s Michigan and Day won their first matchup against each other.

Harbaugh’s obsession with Ohio State has finally brought that long losing run to an end and he has a chance to finally give himself another reason to talk some trash to the rest of the Big 10. For years, the biggest complaints about Jim Harbaugh have been a lack of success against Ohio State and his inability to win titles at Michigan.

Now he has put one of those issues in the rear-view mirror and has a chance to move past the other complaint. Whether they draw Iowa or Wisconsin in the Big 10 title game, the Wolverines will be heavily favored. Not only would that give Harbaugh his first Big 10 title, but it would also secure Michigan’s spot in the College Football Playoff for the first time.

If Harbaugh finally wins a Big 10 title and gets his team to the CFP, I’d expect we’d hear a lot more from Harbaugh heading into next season.