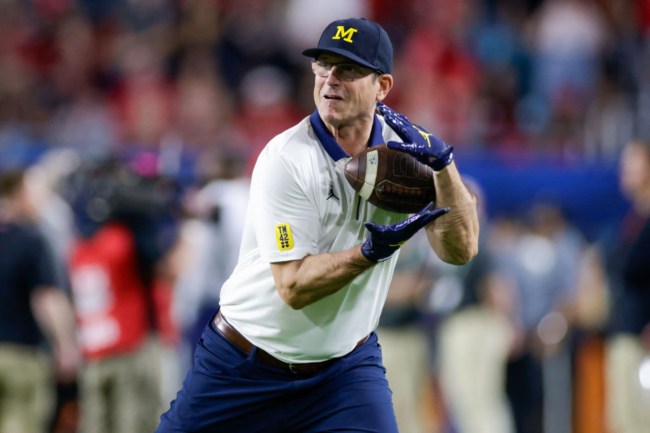 Jim Harbaugh had himself a year at Michigan. Sure, the Wolverines got abused by Georgia in the College Football Playoff, but it was without question his best campaign since arriving in Ann Arbor. Harbaugh beat Ohio State for the first time and the Wolverines earned their first conference title under Harbaugh.

Given the Wolverines’ accomplishments and nearly reaching the mountain top of college football, rumors and reports immediately started to swirl about Harbaugh making a return to the NFL.

Just a couple of days removed from the loss against Georgia, The Athletic cited a source saying “I think it’s real” in regards to there being rumblings from both the NFL side of things and Michigan’s about Harbaugh leaving.

Some believe that if the Raiders’ job becomes available then Harbaugh would have a tough time turning that opportunity down if it were offered to him.

Now, there’s been more fuel added to the rumor mill courtesy of a Michigan recruit’s father.

Maybe Harbaugh Is Using This As Leverage

During a visit with Darius Clemons, a four-star wide receiver who signed with Michigan in December, Harbaugh reportedly admitted that he’ll “entertain” conversations with NFL teams.

“He said that he’ll entertain (it),” Larry Clemons said, according to The Michigan Insider. “He was up front with us about that. I had Coach Harbaugh speak to my pastor. They had a good conversation. Our pastor asked him about that, and that’s just that’s the (reply) that he gave him.”

Harbaugh could very well be entertaining a return to the NFL, after all, he did have big-time success as the head coach of the San Francisco 49ers. Or, he’s in on these rumors and trying to get a pay bump from Michigan after taking a pay cut when signing an extension last season.