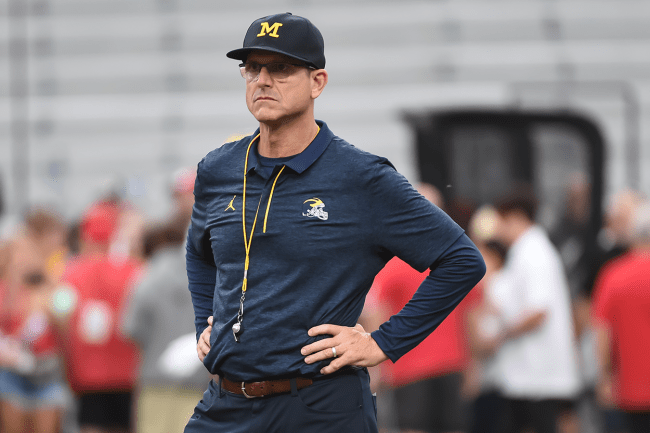 College football is less than 50 days away. With summer practices on the horizon, the 2022 season is set to finally get underway in the fairly near future.

In the meantime, coaches across the country are enjoying some time off. The recruiting dead period is in full effect, which means that no contact can be made with prospects, and it’s not quite time to start laying out a full game plan for Week 1.

Of the coaches who are taking some time off, Lane Kiffin is enjoying some time on the water. So is Jim Harbaugh— just in a different country.

Earlier this month, the Harbaugh family packed their bags and headed off to Italy. As the family made its way overseas, the Michigan head coach’s daughter Grace, who plays water polo for the Wolverines, documented her father in ‘vacation mode’ on TikTok and it was the most relatable thing ever.

From there, she provided a hilarious look at Jim Harbaugh rapping Eminem. And then she shared some more footage of their family trip that included a video of her dad working out that raised one big question.

In the most recent and seemingly final update from the Harbaugh family vacation, Grace filmed Jim while they took a boat out for the day. Set to the main track from ‘Pirates of the Caribbean,’ it shows him jumping into the ocean, climbing up from inside the boat and crushing some pasta while wearing a sunhat.

And he never took off his Michigan logowear.

There is one clip from the video that is particularly hilarious. It shows Jim in full hip-swivel mode while speed walking to get wherever he needed to go. It’s the ultimate dad walk. Take a look:

never question the quality of Michigan gear ever again as Jim has worn it in every possible condition.

Now that the Harbaughs have returned back to the U.S., it’s go mode. Michigan will hope to follow-up its College Football Playoff season with similar success.