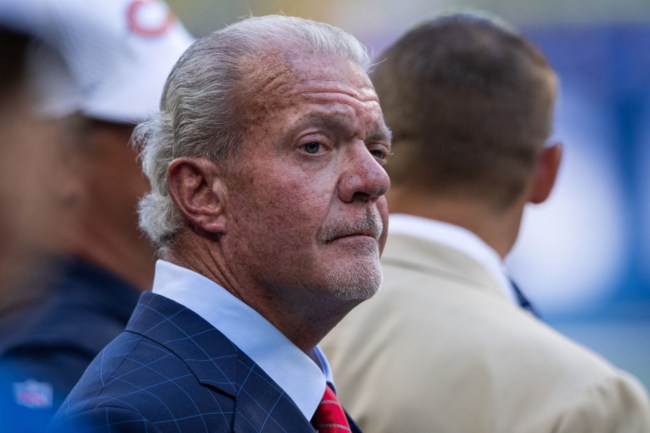 The Indianapolis Colts traveled to Buffalo and throttled the Bills on Sunday by a score of 41-15 thanks to a huge game from running back Jonathan Taylor. It’s safe to say that Colts owner Jim Irsay was excited to see his team win what was their third straight game. He also appreciated a group of Bills fans who were sitting in front of his suite throughout the contest.

So, to show his appreciation, Irsay took out a wad of $100 bills, signed them, and passed them out to the Buffalo fans who put up with all of their cheering throughout the game on Sunday.

Irsay shared the video of Bills fans receiving the money with many shouts of ‘Happy Thanksgiving’ and ‘God bless.’

Sure, it’s an all-time great flex from Irsay, but it’s a classy move as well.

Saying thanks to the classy Bills fans (who sat in front of us and tolerated our cheering yesterday) with some personally autographed “Benjamins.” 🙏 pic.twitter.com/FbvXdIzAM0

Irsay has a net worth of $3.5 billion according to Forbes, so he could’ve handed a nice crisp $100 bill to every person in the stadium and not even blinked.

Being handed $100, even if the bill was signed by Irsay, is a nice little parting gift after having to witness your team get annihilated on its own turf.

This isn’t the first time Irsay has passed out cash to fans. Way back in 2014, Irsay dished out quite a few $100 bills to Colts fans during training camp that year.