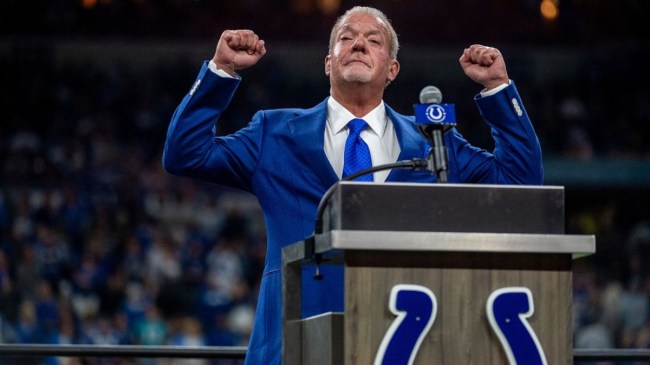 Football fans had a rough night last night. Thanks to some not so great scheduling by the NFL, fans were left to watch the 2nd of 4 primetime games for the Denver Broncos. This one matched up the equally offensively impaired Indianapolis Colts with the Broncos.

What ensued was exactly the kind of bad football that Tom Brady talked about yesterday. The offense was awful to watch. Both struggled to put points on the board, repeatedly turned the ball over, and probably should have racked up even more turnovers than they actually did.

In the end, the Colts prevailed by a score of 15-12 in overtime, because fans needed to suffer though extra football in this game, and since that result became official, there has been nobody happier about it than Jim Irsay.

The Colts owner has spent all day today talking about how beautiful the win was and claiming that there is no such thing as an ugly win.

It’s no surprise that Irsay is just excited that his team somehow managed to not lose that game. Before the game was over, Irsay was already being made fun of for spending months blaming Carson Wentz for last year’s Colts shortcomings as this year’s team was sporting one of the league’s worst offenses.

If the Colts hadn’t pulled off the comeback against a Broncos offense that has failed to show up for most of the year, the decision to go from Wentz to Matt Ryan would continue to look like a bad decision.

It still doesn’t look like a particularly great decision so far with the way the offense has struggled, but at least now Irsay won’t have to reconcile his scapegoating of Wentz with a 1-3-1 record to start the Colts’ first season without him.