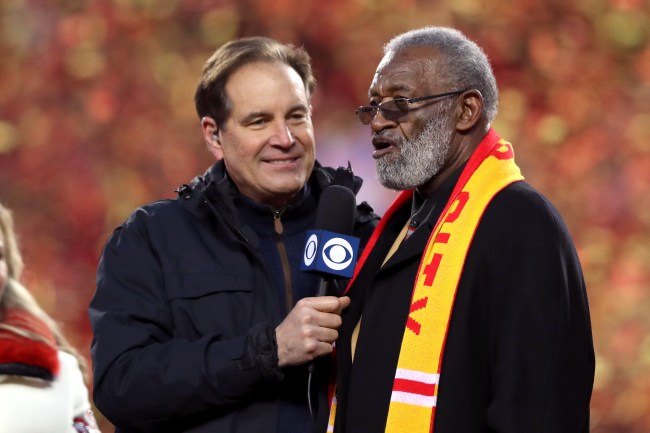 Jim Nantz is the voice of sports. OK, so that might be a bit of an overstatement, but the longtime CBS commentator has been on the mic for some of the most iconic moments in our lifetime. Whether it’s watching him elegantly call The Masters each year, or hear how he manages the NCAA Tournament’s Final Four, or, of course, his top-notch chemistry with Tony Romo during NFL broadcasts, there are few people in sports media like Nantz.

If it seems like Jim Nantz runs a tight ship and always has things organized, you’re probably right. He plays off of his co-hosts perfectly during each sporting event he calls, always providing a perfect narrative for his broadcasting partner to run and excel with. It makes for great drama and storytelling — which, believe it or not, is a critical part in viewer satisfaction.

While Nantz rarely has a misstep while on air, he did describe how it nearly happened during the AFC Title Game trophy celebration. Talking to Dan Patrick the other day, the broadcast legend went into detail about ignoring his producer’s orders in his earpiece for the chance to talk to Travis Kelce — and how that bold decision nearly led to a panic attack, thinking the Chiefs tight end was about to drop an F-bomb on live TV. Luckily, Kelce went with something different, which you can see below.

Nantz may have gotten lucky this time, but he still told Patrick about how nervous he really was in that moment. Take a look at the interesting story.

“I have to tell you, I was insubordinate there. You mentioned that you have voices in your ear, and I had [lead producer] Jim Rikhoff, who I dearly love, and I’m sure he had people behind him that were screaming to get off the air. And Jim kept saying, as I was talking to Patrick Mahomes, ‘This is it! This is it!’ And I’m looking past Pat and I see Tyrann standing there, Tyrann Mathieu, and Travis, and Travis had already tipped me off that he wanted to say something. And what am I going to do? They just won the AFC championship, I’m not going to blow these guys off. I’m not exactly sure what the rush was, and I’m normally good at following instructions, but on this one occasion, I think I said something about ‘I’ve got to get it back to the studio, but hey guys, congratulations,’ and Tyrann just said ‘Thank you,’ but Travis, Travis just went off, and it made the whole thing great.”

“Travis’ moment was pretty darn cool. That was different. I actually have to confess, when he grabbed the mic, and I held on for dear life as you said, because you’ve got the network in your hands, when he started to say the word ‘Fight,’ the f seemed to take a little longer than normal. I had a lot of thoughts racing through my mind, and I did think somewhere in that millisecond, there was a synapse or something that was telling me, ‘Oh my god, I disobeyed, I was insubordinate, and I walked right into the f-bomb right here on national television.’”

Thankfully, Kelce (probably) understood the moment was being broadcast on live TV and held back from the F-bomb — which wasn’t the case a few minutes earlier while interrupting a postgame interview with Patrick Mahomes. So, while Jim Nantz came away unscathed here, his decision to ignore his producer nearly gave him a heart attack up there on stage.