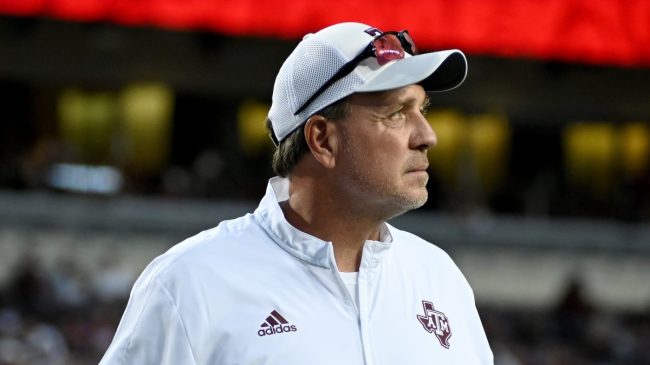 Perhaps nobody in the college football world has had as interesting a year as Texas A&M coach Jimbo Fisher.

Fisher began the year on the hot seat after a disappointing 8-4 record in 2021. But then he pulled in a record-setting 2022 recruiting class. Said recruiting class was so good that it led to complaints from Alabama head coach Nick Saban and an eventual feud that prompted Fisher to call his former mentor a “narcissist.”

The remarkable recruiting class also led to a ton of hype surrounding the Texas A&M program. Despite the 8-4 record a year ago, the Aggies began the 2022 season ranked in the top 10 in both the AP and USA Today Coaches Poll.

Cracks quickly began to appear in the armor of the Aggies.

A lackluster performance in a 31-0 win over Sam Houston State raised eyebrows. But it was a Week 2 upset loss to Sun Belt visitor Appalachian State that really showed how far Texas A&M still has to come to reach the top. The Aggies have rebounded well in the weeks since. They claimed a pair of ranked victories over Miami, which is dealing with issues of its own, and Arkansas in successive weeks.

Those victories propelled TAMU all the way back up to No. 17 in the most recent AP Top 25. Things appeared to be looking up for ol’ Jimbo.

But then he was sent crashing back down to earth in hilarious fashion.

You would think that a 14-year contract that’s worth over $100 million would mean that Fisher is above the rules for the average citizen in College Station.

But that doesn’t appear to be the case.

Video circulating on Twitter on Friday showed the head coach’s Ford truck being towed from his spot at the Aggies’ football facility.

they really towed Jimbo’s truck 💀 A1 towing is ruthless pic.twitter.com/Z2nC9cHbIq

Texas A&M fans and students weren’t shocked at all by the video.

Oh my gosh lol. Towing was always ruthless in my time at A&M but even the Head Coach is not immune to it I guess. https://t.co/9htoPA6smV

No one is safe from A1 Towing https://t.co/UbfumZsVeE

At least Jimbo isn’t lacking the funds to get his truck back. But that’s another brutal look for TAMU.