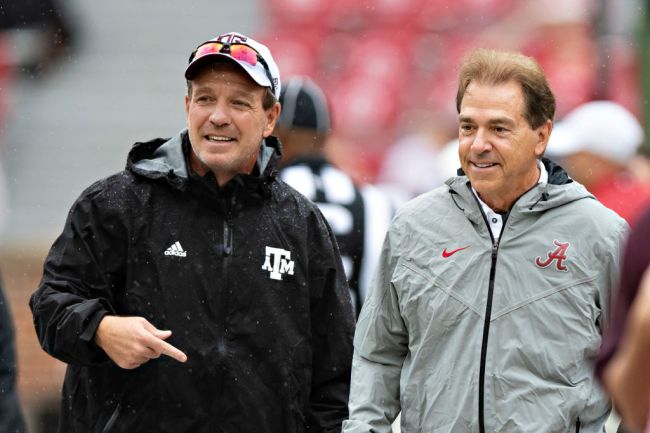 If there’s one thing you do not do as a head coach in college football it’s piss off Nick Saban and Alabama. Universities should start adding that as an expectation in coaching contracts; ‘Rule No. 1, do not say Nick Saban’s name unless you are complimenting him.’ Texas A&M head coach Jimbo Fisher apparently doesn’t live by that rule, however.

Fisher is a lighthearted guy that doesn’t take himself too seriously, he’s one of those coaches that jokes around when the opportunity presents itself. Nevertheless, even if he was joking around with his latest comments about Saban and the Crimson Tide, that’s a bear that’s not worth poking, ever.

During an appearance at the Houston Touchdown Club, Fisher was asked to give his keys to beating Alabama other than the obvious answer of Saban retiring.

Fisher’s answer, while laughing: “We’re going to beat his ass, even when he’s there.”

That noise you just heard? Yeah, that’s Saban stapling that quote to the bulletin board in his office.

Fisher’s answer was absolutely a joke, but that doesn’t change the fact that he said what he said. Fisher and Saban go way back both as friends and colleagues as they spent years together at LSU, but that doesn’t necessarily take away from the story here.

Ole Miss head coach Lane Kiffin, who also has a history with Saban, saw the story and said he thought this was a bold strategy on Fisher’s behalf as well.

Here we go again. 🤦‍♂️ calling out the 🐐 ⁦In the middle of another championship?!?!? ⁦Good luck ⁦@AlabamaFTBL⁩ Just went on the wall in the weight room in TTown https://t.co/thzGuy1LCj

Since arriving in College Station, Jimbo Fisher’s Aggies have lost by an average of 23 points in their three meetings with Alabama.

There’s nothing wrong with Fisher being confident that A&M can flip the script on the Tide sooner rather than later, but that’s the sort of thing you want to keep to yourself and let the play on the field actually deliver the message.