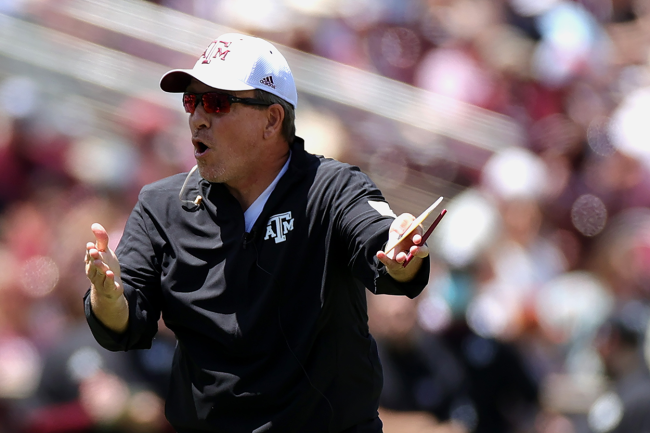 Jimbo Fisher has been very adamant that Name, Image and Likeness money did not play a role in Texas A&M’s recruiting Class in 2022. The Aggies landed 30 commits, highlighted by eight five-stars and 20 four-stars, finishing as the highest-ranked class of all-time.

Since then, Fisher has been involved in a lot of conversations about NIL. He was called out by Nick Saban in , who said that Texas A&M “bought” every one of its commits. That sparked significant beef between the two coaches and resulted in a very sweaty Fisher getting very feisty with a reporter.

Just over a month later, at the end of June, a video surfaced out of College Station. The short clip showed an A&M staffer telling a group of visiting recruits that they will be “getting a lot of money” if they decide to play for the Aggies.

“Y’all getting a lot of money from the people behind these suites if you decide to come play here,” the staffer says in the video.

On Thursday, at SEC Media Days in Atlanta, Fisher was asked about the video. He proceeded to call out the staffer in the video.

Fisher said that the staffer on camera had only been on the job for one month. As a result, the staffer may have presented his message differently than he intended.

Fisher said that the “money” mentioned was not about NIL. He said that it was the standard message given to every recruit about the school’s boosters, who fund the program’s facilities, upkeep and day-to-day operations.

Jimbo Fisher clarified of the video that went viral of a staffer talking to recruits about financial benefits. Fishers said that staffer had been on the job one month and was talking about the boosters that help fund the whole program.

Obviously, Fisher knew that question was coming. He was prepped on what to say. He was never going to admit to enticing recruits to Texas A&M with NIL money.

But he did the staffer so dirty— it was only his fault because he was the one who got caught. Fisher also used the word “was” on staff for about a month. Presumably, he was referring to the staffer at the time of the video in past tense.

However, could he have been referring to the staffer in the past tense because he is no longer on staff? Either way, Fisher threw him right under the bus.