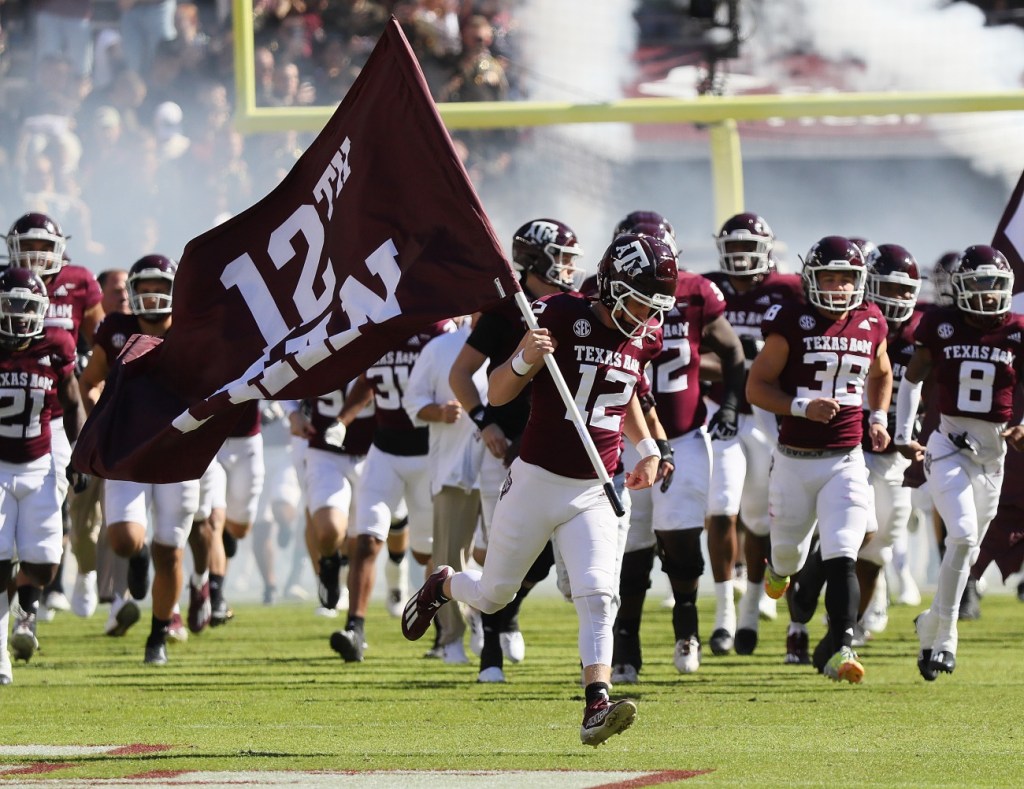 A video circulating online appears to show a Texas A&M staffer, player Personnel Assistant at Texas A&M University Andrew Bather, discussing potential NIL deals with prospective recruits. It’s unclear when exactly the video was filmed (old or new) or the reasons why it is now making the rounds online.

So let’s just focus on what we know is happening the video. We see a Texas A&M staffer leading a group of recruits on a visit inside Kyle Field. He points around at the 121 luxury suites in Texas A&M’s Kyle Field. He then says “y’all getting a lot of money from these people behind these suites if y’all decide to come play here.”

Funnily enough, he didn’t even need to finish that sentence because those recruits would be getting paid a lot of money anywhere they went thanks to the Name, Image, and Likeness opportunities in College Football.

Correct me if I'm wrong, but I thought you weren't suppose to talk about money on these recruiting trips?

"NiL hAd nOtHiNg tO dO WiTh iT"#GigEm #CFB @NCAA pic.twitter.com/bsSpAoRIOX

The overwhelming response on Twitter is ‘they’re saying the quiet part out loud’, that Texas A&M players get paid “a lot of money” by the people holding those suites.

NIL is BIG BUSINESS everywhere but Texas A&M seems to dominate a large portion of the conversations surrounding NIL money. There are some great stories like this one of Aggies star running back Trayveon Williams teaching an NIL Class at law school. But then there’s the constant bickering between Jimbo Fisher and Nick Saban about who is doing what.

Here is the actual NIL guidance sent to schools and obtained by @SInow https://t.co/fQhV8WCnbG pic.twitter.com/n7lAtwFy1c

At the top of the second page you’ll see ‘Institutional coaches and staff may not communicate directly or indirectly with a PSA on behalf of a booster/NIL entity.’ (PSA = prospective student athlete). As far as I can tell, that’s really the only thing in the latest NCAA guidance that might apply to that video above but it’s a pretty big stretch.

The coach isn’t speaking on behalf of any specific booster or NIL entity, he appears to be speaking vaguely about how Texas A&M has a strong NIL program. Which, of course, is what college football fans have been talking about all along.

Jimbo Fisher’s constantly talking about how Texas A&M hasn’t broken any rules while simultaneously nobody is accusing him of breaking the rules, the media just points out the alleged amount recruits received in NIL deals that led to the #1 recruiting class in NCAAF history.

What CFB Fans Are Saying About This Texas A&M Video

Let’s head on over to Twitter and see what folks are saying about this clip.

Just going to sit here and wait on national media members to bring those press conference clips back up and hold Jimbo accountable https://t.co/LBdisKn4wg

I thought NIL had nothing to do with Aggie recruiting?

So must be all the championships they are winning.

Aggies fans saying it wasn’t ONLY the NIL money are 100% correct. When top recruits see other top recruits flocking to a program and know that team’s about to explode it’s natural to want to get in on that. The NIL money, of course, has played a massive impact in recruiting across the board.

After all of the ‘NIL money had nothing to do with our recruiting class’ sentiment it sure is interesting to see Texas A&M Personnel Assistant Andrew Bather appearing to mention it to recruits. At the very least, it seems to contradict the notion that NIL money doesn’t matter when bringing in recruits otherwise why would it be mentioned?

It’s worth pointing out that the account that tweeted this video first has ‘TEXAS LONGHORNS’ in their bio. So it certainly doesn’t seem as if this video was shared without some sort of an agenda behind it.