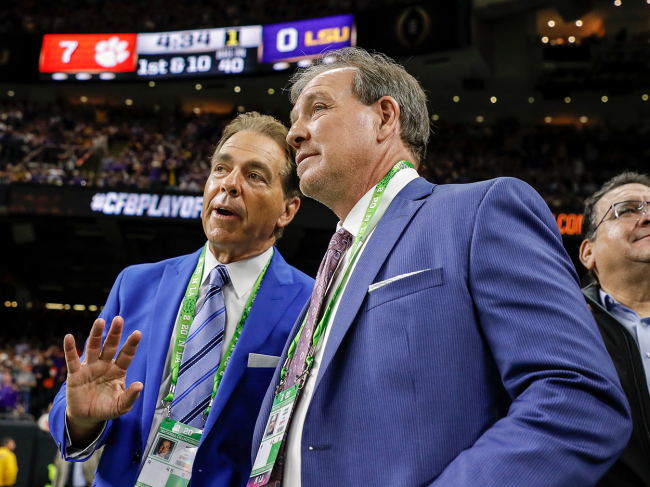 Jimbo Fisher and Nick Saban have been the talk of college football over the last few weeks. The two SEC head coaches have been going back-and-forth over NIL and the role that it plays in recruiting, but the beef seems to be behind them.

The whole thing began when Saban spoke about Name, Image and Likeness at an alumni event in May. During his nearly seven-minute-long rant, the Crimson Tide head coach called out a few college football programs for their recruiting practices. Texas A&M was one of them.

Saban said that the Aggies “bought” every single one of their recruits in the Class of 2022, which was the greatest class of all-time.

That pissed Fisher off. He called an impromptu press conference the next morning and went absolutely bananas while standing on his soapbox.

The vast majority of what Fisher said was extremely outlandish and a good chunk of it may not have been true. Either way, he proceeded to end his friendship with Saban, under whom he coached at LSU.

Ultimately, Saban ended up apologizing and admitted that he should not have called out anyone by name. He also reiterated that he didn’t really say that Texas A&M did anything wrong, because they are operating within the realm of legality in today’s era of NIL.

Not long thereafter, a very sweaty Fisher sat down with a local reporter and got very feisty while defending himself and his program.

The conversation about Fisher and Saban’s beef died down momentarily, but it was reinvigorated during the SEC coaches meeting this week.

Kirby Smart gave his thoughts on the drama and said that he wasn’t even phased. Saban said that he is done talking about it. Fisher, who had the funniest assigned seat possible, also chose to move on from the incident.

Neither of them confronted the other and no drama was had. Kiffin even called them both out for not speaking up in person.

Lane Kiffin on coaches meetings: "Somehow our group is more professional in the room together than they are on camera themselves." Compares it to texting. "People like say things texting they don't in person."

Although the coaches themselves did not say anything about the back-and-forth, another party decided that he would. LSU’s athletic director Scott Woodward, who is not involved in the beef at all, took shots at Fisher and Saban on the Paul Finebaum show. He called them “hillbillies from West Virginia.”

LSU AD Scott Woodward with the best response we've heard yet to the Jimbo Fisher vs Nick Saban feud: pic.twitter.com/cYFGofCd0u

Now, both coaches are from West Virginia, so Woodward’s comments couldn’t be funnier. However, he is from Baton Rouge so there is some essence of the pot calling the kettle black. Either way, Woodward took a shot at them both even though LSU is not involved in it all.