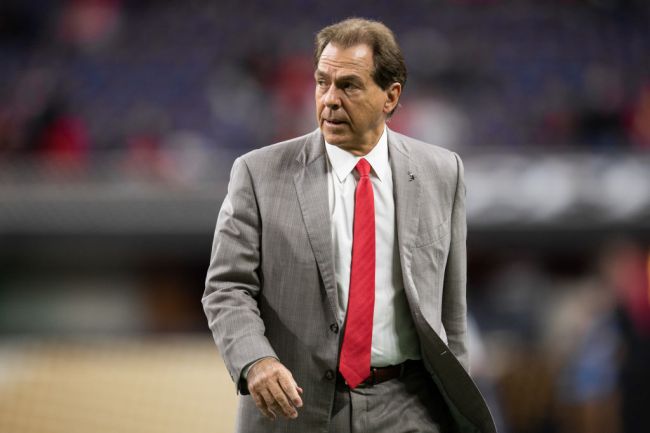 The world of SEC football has gone on quite the rollercoaster ride over the last 24 hours. Last night, Nick Saban called out Texas A&M and Jackson State for the NIL deals they’ve allegedly used to attract players.

This morning, Jimbo Fisher called a press conference to fire back at Saban and had a lot to say about his rival. Then the SEC came out and said that they had both broken the conference’s sportsmanship bylaws.

Now, Saban has actually apologized for singling out those two programs.

Nick Saban on SiriusXM College: “I should never have singled anyone out. That was a mistake. I really apologize for that part.”

“I’m not against NIL. … It’s the whole system. Is this a sustainable system, and is it good for college football?"

Saban also confirmed that he had reached out to Fisher and Jackson State head coach Deion Sanders, but didn’t hear back from either.

Saban on SiriusXM: “I reached out them (Jimbo and Deion). Never got a response. I feel bad about it. I’m not changing my philosophy. I look at the betterment of college football, the game."

Saban then delved into the actual issues with NIL he claims he was trying to address.

Saban on SiriusXM: “I really wasn’t saying anybody did anything illegal in using NIL. That was something assumed by what I said. It’s not what I meant. There’s nothing illegal about doing this. It’s the system. That’s the issue I have."

Saban: “I don’t think NIL is the issue. I think collectives are the issue.”

Says collectives should be part of the school and not allowed to induce players to pick their school.

Saban is correct in his assertion that he didn’t actually accuse anybody of doing anything illegal. NIL deals are completely legal in college sports. Saban’s complaints likely just stem from the fact that a team has reportedly used them to negate Alabama’s recruiting advantage.

While Saban’s apology should bring an end to this issue for now, that October 8th matchup between Alabama and Texas A&M is still sure to be one fans are looking forward to.