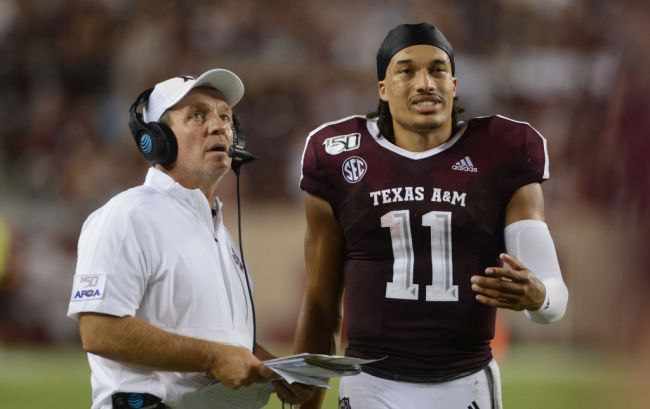 Unfortunately, the Michigan – Ohio State game won’t be played after the Wolverines elected to cancel the contest due to COVID-19 issues within the program. Michigan fans may not be too disappointed seeing as how their team was going to get embarrassed by the Buckeyes, but it’s still a bummer we won’t have ‘The Game’ this year.

As soon as Michigan canceled the game, college football fans immediately put two and two together. Ohio State needs to play one more game to reach a total of six games played in order to qualify for the Big Ten Championship game per the conference’s rules that are currently in place.

Texas A&M had its game canceled against Ole Miss due to COVID-related issues within the Rebel program, so how about a matchup between the No. 5 Aggies and No. 4 Buckeyes? With this already being the most bizarre college football season in history, it would make sense for this impromptu matchup to take place.

Texas A&M head coach Jimbo Fisher joined ‘SEC This Morning’ on Sirius XM on Wednesday and addressed the idea floating around. While he did say the Aggies “would be considering it” the short notice makes the game pretty much impossible in his eyes.

“But on a Wednesday,” Fisher asked. “I think you’re being a little bit crazy with it because you know that from game preparation and to get the quality game you want I don’t think you would do it,” he said. “There’s a lot on the line. You’d want to be prepared. To play them? Yeah it doesn’t bother me to play them.”

Would @AggieFootball head coach Jimbo Fisher be willing to play #OhioState this weekend? Not so fast, Twitter. He joined @JacobHester18 and @ChrisDoering on #SECThisMorning pic.twitter.com/xChNIGXrSk

At the end of the day, both teams need this game. A&M won’t be playing in the SEC Championship game therefore it needs another big win and some help in order to get into the CFB Playoff and the easiest way for the Aggies to do that would be to beat Ohio State.

It doesn’t sound like we’ll be getting a matchup between the Buckeyes and Aggies this weekend, however.