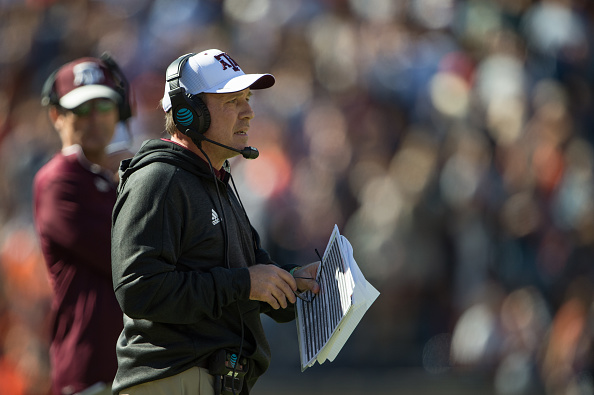 A fight broke out on the field after last night’s wild Texas A&M -LSU game.

Immediately after the game ended, a video surfaced of LSU Director of Player Personnel Kevin Faulk throwing punches at aN unidentified man in an Aggies shirt.

Apparently the man in the Aggies shirt struck an LSU assistant Steve Kragthorpe who suffers from Parkinson’s disease.

POSTGAME | #LSU director of player personnel Kevin Faulk and an unknown man with what appears to be an #Aggie bench credential throw punches on the field after @AggieFootball defeated @LSUfootball in 7-OT @theadvocatebr pic.twitter.com/H7EvCNmoIv

Word is that this person punched LSU's Steve Kragthorpe, who is suffering from Parkinson's.

Can confirm that #LSU analyst Steve Kragthorpe, who has Parkinson's was punched by the fan.

Kragthorpe is okay now. Faulk threw back the guy who hit him. https://t.co/jrGitiyeyq

The Advocate has now IDed the man who allegedly punched Kragthorpe and it’s apparently the nephew of A&M coach Jimbo Fisher.

Cole Fisher, the nephew of Texas A&M coach Jimbo Fisher, has been identified by multiple sources to The Advocate as the man who multiple athletic officials said punched an LSU analyst, which preceded an on-field scuffle following the Tigers’ 74-72 loss in seven overtimes to the Aggies Saturday at Kyle Field.

LSU analyst Steve Kragthorpe, a team analyst who suffers from Parkinson’s disease, was punched on the field after the Tigers’ loss, an LSU official told The Advocate early Sunday.

Kragthorpe told The Daily Advertiser on Sunday that he has had a pacemaker in his chest to stimulate his brain since 2017, which Cole made contact with when he punched Kragthorpe in the chest.

“Out of nowhere, I got nailed,” Kragthorpe told The Daily Advertiser. “I didn’t go down, but I clutched over. I was like, ‘Damn, he got me right in my pacemaker.’ Then it started fluttering like he jostled it.”

Kragthorpe was checked out by a Texas A&M team doctor, and he said he felt “OK, but not as good as I was” and that he “will be seeing my neurologist in Baton Rouge on Monday.”

Kragthorpe said he doesn’t plan on pressing charges against Cole, but he said Texas A&M could be responsible for any potential injuries he sustained.

Not a good look for Jimbo and A&M.