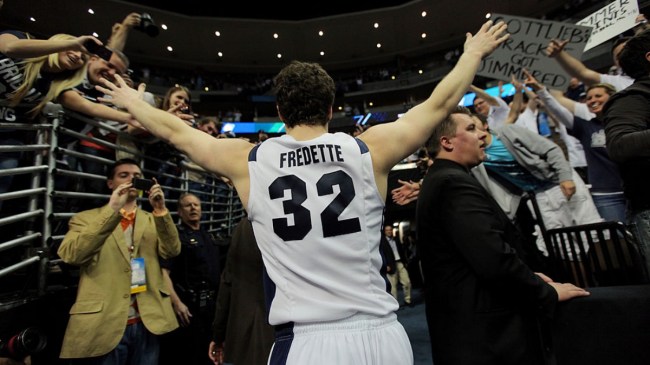 The BYU Cougars basketball program had a surprise guest at their walk-on tryouts yesterday.

The players trying out for the team had some unexpected competition at the tryout in the form of a player from Cincinnati calling himself “Slick Nick”.

The mysterious player was impressive at the tryout, knocking down plenty of jump shots and showing off his passing prowess.

After the tryout, the player made a shocking reveal to the rest of the players working to earn themselves a spot on the team. Slick Nick removed his mustache and revealed a fake belly beneath his shirt, revealing that he was actually BYU legend Jimmer Fredette.

Some of the other players may have been on to him during the tryout as one even remarked that he looked familiar.

Jimmer had an incredible career at BYU. Over the course of his career at BYU, the Cougars appeared in the NCAA tournament in 4 consecutive years, won at least a share of the Mountain West regular season title 3 times, and even made an appearance in the Sweet Sixteen.

It’s too bad for the Cougars that Fredette doesn’t have any eligibility left. He could be just what they need to finally dethrone Gonzaga in the West Coast Conference.