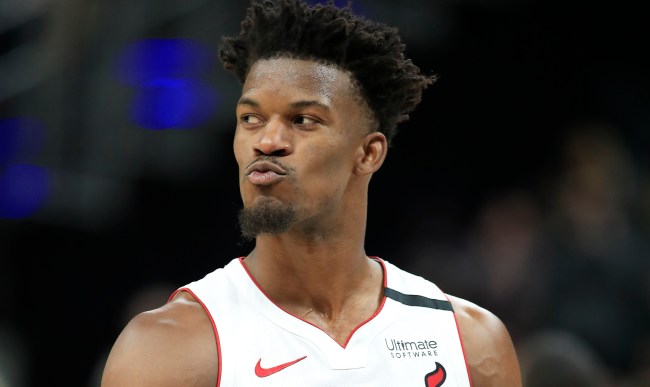 When Jimmy Butler signed with the Miami Heat last summer, he brought instant credibility, leadership and All-Star skills to a young and improving roster. Fast-Forward to today, the move seemed to pay off, with Butler helping guide the Heat to a No. 4 seed in the Eastern Conference as they enter the NBA Playoffs, with a lot of experts wondering if Miami could be a surprise conference champ when all is said and done.

One thing the Heat didn’t imagine would happen when they signed Butler, though? The 30-year-old handing out cold-hard lessons in entrepreneurship, but that’s what he’s currently doing inside the NBA bubble from his hotel room.

According to Ira Winderman, who covers the Miami Heat for the South Florida Sun Sentinel, Jimmy Butler is straight up hustling his younger Heat teammates, charging them a ridiculous $20 for a cup of coffee — all because they get to use his precious French Press to make the cup of Joe. Take a look at some of the rules Butler outlines, which includes no IOUs and, even more savage, charging the same no matter the size of coffee.

So apparently Jimmy Butler wasn't kidding about the up-charge for the use of his French Press at Disney. (From Meyers Leonard's Twitter): pic.twitter.com/1s1em6flRG

Now, we’ve heard reports about some players bringing a lot of random things into the NBA bubble — which includes the likes of arcade games, boxing equipment, hundreds of thousands of dollars in Amazon orders and a full-size refrigerator (with ice machine), among other things — as well as Portland Trail Blazers star CJ McCollum using his hotel room as a makeshift wine fridge to protect the 84 bottles of vino he brought with him, but Jimmy Butler charging $20 for his Heat teammates to use his French Press is just next level high class. Does this thing make liquid gold or something?

But, hey, with players forced to find creative ways to get the everyday essentials that they often take for granted outside of the NBA bubble, Butler’s just taking advantage of his A+ French Press machine and doing what every good businessperson does: Charge more when there’s less supply and lots of demand. It’s hard to knock that kind of hustle from Jimmy; even if he is making an insane $35 million this season.