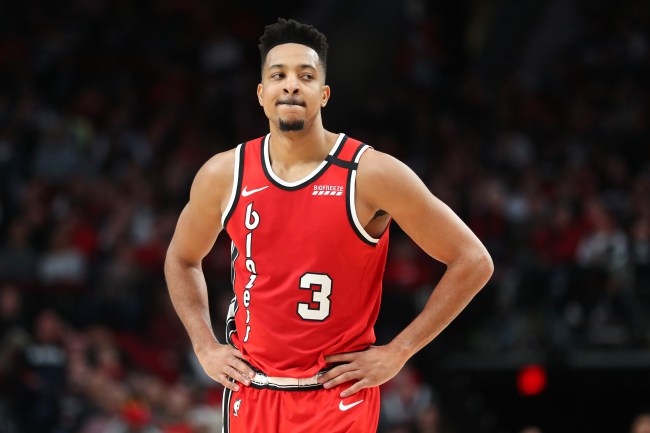 Blazers guard CJ McCollum’s one of the many NBA players who love the hell out of some wine. No, like, this whole community of vino drinkers in the Association is wild, with guys like LeBron James, Chris Paul, Carmelo Anthony and others pretty much starting a movement a couple of years ago that has dudes trying to one up each other by getting the most exclusive labels known to man.

Naturally, because these guys are all competitive AF, it means they’re dropping thousands on private cases and bottles, with many bragging more about their wine collection than their stats in a game. And, with every one of these players inside the NBA bubble right now, some, like McCollum, are going to great lengths in order to protect their most valuable beverage in order to survive.

According to a recent ESPN article about the NBA’s unofficial wine club inside the bubble, CJ McCollum’s story sort of stood out above some of the others mentioned. That’s because he’s literally keeping his hotel room as cold as possible in order to salvage his wine, turning the A/C down to as low as possible a lot of the time.

CJ McCollum’s hotel room constitutes a wine fridge of sorts. He keeps the temperature around 60 degrees when he’s inside it and in the mid-to-high 50s when he’s not, all in an effort to protect the 84 bottles that he keeps in boxes, out of the light.

That’s some serious commitment from McCollum, but something that’s pretty damn necessary in order to keep his wine as smooth as possible; I just hope he’s got a closet’s worth of sweatshirts to keep himself warm. The fact that he’s got 84 bottles in his room right now might be even more absurd, because even if the Blazers end up reaching the NBA Finals this season — which, at the latest, means the season goes to October 12 — the guard will be able to drink about 9.5 bottles of wine per week without being on empty. That’s nuts.

We’ve seen a lot of NBA players ship in some random things to the NBA bubble, and, given the popularity of wine, there’s no telling how many bottles might be packaged up and being stored in there right now. McCollum’s just taking things to a whole new level to protect his.