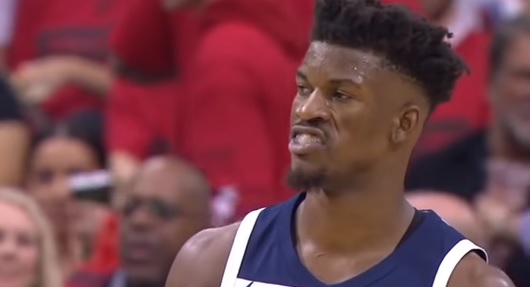 Last month, Jimmy Butler shocked the NBA world when he told the Minnesota Timberwolves that he wanted to be traded from the team.

Jimmy Butler has requested a trade from the Minnesota Timberwolves, league sources tell me and @JonKrawczynski. Butler has given Minnesota a list of one-to-three teams with whom he's open to signing extension, in anticipation of trade.

It’s been known for some time that Butler had issues with his younger teammates Karl Anthony-Towns and Andrew Wiggins.

Sources familiar with the situation told Sporting News that Butler is uncertain about playing with Wiggins — Butler had problems last season with Wiggins, his work ethic and his approach on the defensive end of the floor. Thibodeau has had similar problems with Wiggins in the past, too, and he had some hope that bringing a tough-minded veteran like Butler into the locker room would spur Wiggins to improve. It didn’t.

One rival GM spoke to Amico Hoops anonymously and ripped Butler to shreds for forcing his way out of Minnesota.

“I don’t trade him,” an opposing general manager told Amico Hoops. “I tell him to stop whining, honor his contract and report to work. I tell him to be a man. He’s what? Almost 30 years old? Time to grow up.”

When Butler first entered the league, he drove a pickup truck and listened to country music. The Chicago Bulls drafted him with the final pick in the first round in 2011. Back then, no one expected him to become a star. Most wondered if he could even cut it as a pro.

“He was a humble country kid who was happy to be in the NBA,” one league source told Amico Hoops. “Now, he drinks $4,000 bottles of wine and thinks he is LeBron or D-Wade.

“It’s really sad because he was the best kid ever.”

As of now both the Miami Heat and the Houston Rockets are the only two teams who are interested in trading for the Wolves forward.

Two other league sources have told @5ReasonsSports that the Heat and Rockets were the teams most engaged in trade conversations with the Wolves to that point. There is also a belief the Clippers could change the equation if they offer more. Mostly, teams are waiting on Thibodeau.

Houston is tinkering with different in a trade for Jimmy Butler. Sacramento Kings are involved in some scenarios. I’m told the Rockets are now working around not giving too much like PJ Tucker b/c Butler might bolt next summer. https://t.co/dazgqFe1cw