Jimmy Butler Once Said He’d ‘Never Wear A Miami Heat Jersey’ While Talking About His Style, And Twitter Had Jokes 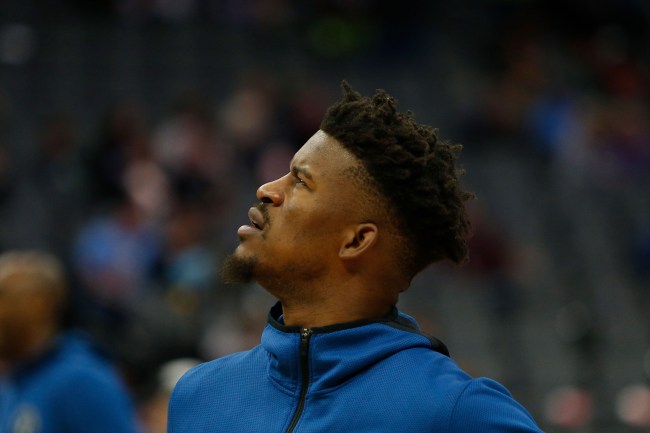 Jimmy Butler was all set to join the Miami Heat yesterday; well, until he wasn’t. The All-Star forward was expected to be part of a sign-and-trade deal that would see him go to South Beach, while a few other teams involved ended up with some solid pieces. But things hit a snag when the Dallas Mavericks, one of the teams involved in a three-team trade, decided they didn’t want Goran Dragic from the Heat, which now puts everything in limbo moving forward.

While Butler waits around to see what might happen next with his NBA future, the rumors that he could join the Miami Heat brought a lot of mixed reactions. For one, it’s a strange fit, because Jimmy Butler would be the perfect third banana alongside other superstars — namely on the Los Angeles Lakers. Second, is Butler really the guy who will take the Heat back to the promised land all by himself? Third, and this one’s pretty weird, the All-Star once said in an old interview that he would never wear a Heat jersey, which got mentioned during a feature about his style.

Loyalty is just a word in the dictionary pic.twitter.com/dNbfrZoZxk

Well, this just got really awkward, didn’t it?

Sure, the interview that Jimmy Butler mentioned the whole Heat thing in came when he was just 23 years old and still in college, but, as we all know, the Internet is forever, and shit like this comes back around all the time. And, if the Twitter reactions to the quote are any indication, people are loving the fact that Butler is getting burned for something he said years ago.

He wrote that before the vice jerseys dropped

Everybody has a price!

Waiters and Butler is going to be fun 😁🤣🤣

You can’t fault Jimmy Butler for saying he’d never wear a Miami Heat jersey years ago, because we all say and do dumb stuff when we’re young. How the hell did he know the team would want to pay him millions of dollars to play basketball back then? Still, this should serve as a lesson to younger ballers — never give fashion advice in a college magazine.