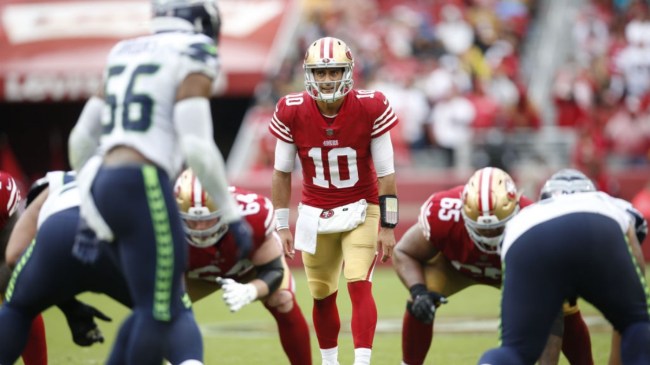 Jimmy Garoppolo has only been the starting quarterback of the San Francisco 49ers again for a week, but it seems like him and Kyle Shanahan already aren’t on the same page.

Yesterday, Garoppolo told reporters that he felt freedom to throw down the field like he did in 2017 and would like to have that freedom more this season.

I’d love that. Yeah, there’s a lot of things that go with that obviously, but yeah, I love doing that stuff. In ’17, there was a freedom where me, the receivers, tight ends, we had a good chemistry going. And when you get that with offensive skills and a quarterback, it makes for a tough offense.

Kyle Shanahan isn’t quite sure what Garoppolo is referencing as he sees no difference between Sunday’s game plan and what the team usually does.

You’d have to ask him what he meant by that. There was no difference in that game than every game, so you can ask him on that. It was probably just going in when the game plan is for someone else and just coming off and winging it and going with it. That’s what I would guess, but it sounds like that’s a question for him

Shanahan continued, saying that if anybody wants to understand what Jimmy G was talking about, they’d have to ask him.

No, I really don’t know the quote that he said. I’m with Jimmy a lot, so nothing really surprises me. I get to talk to him every day. I hear your huge interpretations of that quote and you guys just said it. I can’t interpret it. I interpret it with my relationship with him every day, so just go ask him what he meant by it.

Garoppolo and Shanahan will have to get on the same page soon as they’ll be working together with the 49ers for the rest of the season.