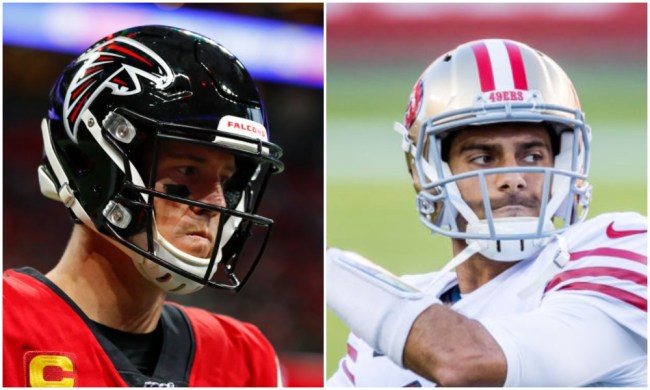 The Patriots will likely be on the lookout for a new quarterback next season. The Cam Newton era in New England may not be an era at all, instead just a one-season flop with the Pats at 2-5 on the year and trending in the wrong direction.

One quarterback that could be on the trading block this offseason is Jimmy Garoppolo. While it would be seen as a unique move for the Pats to bring back a quarterback they traded away on Halloween of 2017, Bill Belichick was always fond of Garoppolo during his time in New England, the issue was Tom Brady was still in town.

ESPN has been churning the rumor mill about Jimmy G possibly returning to New England next season. Not only has one analyst said that the Pats would be the ‘most logical suitors’ to land Garoppolo, former Patriots Rob Ninkovich sees it happening as well as he explained on ‘Get Up’ on Friday.

“I think he’ll be a New England Patriot,” Ninkovich said. “When is the last time you’ve seen Bill Belichick walk up to the opposing team’s quarterback after they lost 33-6 and tap him on the back to shake his hand?”

.@ninko50 believes that Jimmy Garoppolo will end up in New England, and the 49ers will land Matt Ryan next offseason 👀

"The Patriots are gonna get Jimmy G." pic.twitter.com/Udh45WZjUy

While Garoppolo being shipped back to New England would be one thing, Ninkovich also threw out a prediction that Matt Ryan may end up taking over for Garoppolo in San Francisco as he could move on from Atlanta.

Garoppolo hasn’t been dominant in San Francisco, but he could revamp his career in New England while Ryan could find success with a change of scenery.