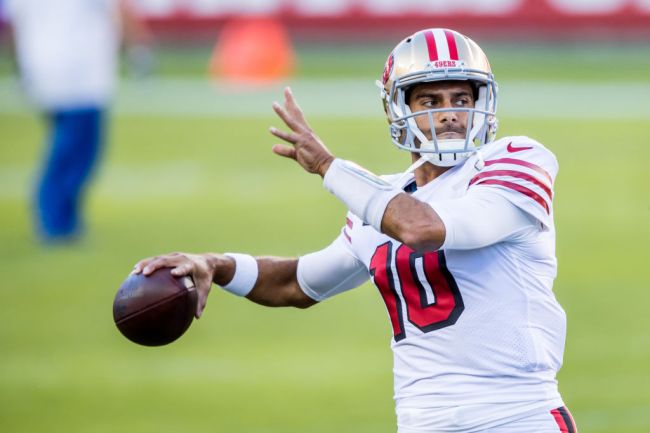 With Jimmy Garoppolo set to miss yet another extended period of time due to an injury, the rumor mill has started churning when it comes to his future in San Francisco, more specifically, if he has one.

Garoppolo did lead the 49ers to a Super Bowl appearance just one season ago, but given his injury history and the growing consensus that he isn’t one to completely change a franchise, the question has arisen on whether he’s the man for the 49ers and if the answer is no, then which franchise could give him another opportunity.

If San Francisco decides that it is time to move on from Garoppolo, ESPN’s Bill Barnwell thinks that there’s one very ‘logical suitor’ out there for the former Eastern Illinois QB, his former team in New England.

There would be one team that looms as an obvious fit for Garoppolo, of course. The Patriots will have more cap space than the 49ers and don’t have a solution under contract for 2021. Cam Newton and Brian Hoyer are both free agents after the season, leaving Jarrett Stidham as the only quarterback under contract.

If the 49ers wanted to move on from Garoppolo, the Patriots would be the most logical suitors and the best landing spot for the veteran. The return would not be as exciting as Niners fans might hope; it’s difficult to imagine New England sending much more than a mid-to-late-round pick in return for him.

Newton’s contract will be up at the end of the season, and the way that experiment is going so far this season, the Pats likely won’t be chomping at the bit to give him a new deal. The Pats could find themselves in a position to draft a high-end quarterback in the NFL Draft if things continue to trend like they are, but if they don’t and Garoppolo does hit the market, there are certainly worse quarterbacks out there if you’re New England.

Garoppolo carries a cap-hit of $27.5 million, so it could be a big risk taking on that contract, but let’s not forget that Bill Belichick did like the QB quite a lot when he was in New England.