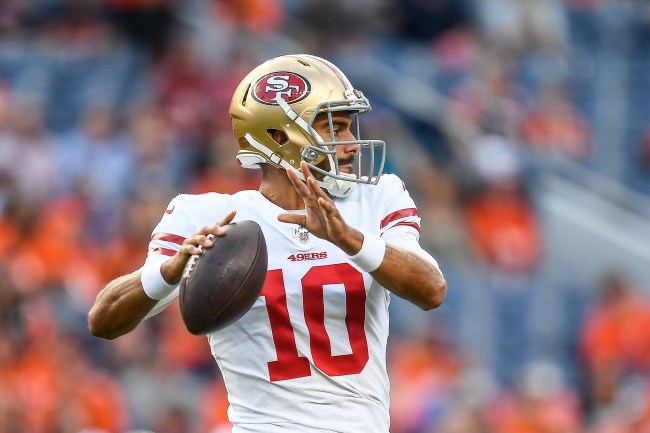 It would appear that the 49ers are going to be without two key offensive players for an extended period of time. Late in its loss to Seattle on Sunday, San Francisco lost quarterback Jimmy Garoppolo and tight end George Kittle to respective ankle and foot injuries. Adam Schefter reported on Monday that Garoppolo is expected to be sidelined for a minimum of six weeks with a high ankle sprain, and Kittle will miss up to eight weeks with a fracture in his foot.

Jimmy Garoppolo seen walking to the locker room at the start of the 4th Qtr. pic.twitter.com/NVR4rRJJ7u

These two losses come as a huge blow to the 2019 Super Bowl runners-up, who have seen significant issue with staying healthy for much of this season. Garoppolo, Kittle, running backs Raheem Mostert and Jeff Wilson Jr., wide receiver Jalen Hurd, backup tight end Jordan reed, defensive linemen Nick Bosa, Dee Ford and Solomon Thomas, and cornerback Richard Sherman are all on the team’s injured reserve list, or headed there. To make matters worse, running back Tevin Coleman, wide receiver Deebo Samuel and linebacker Kwon Alexander are three of seven listed players on the injury report who did not play on Sunday. Phew.

Losing Garoppolo, who is in the third year of a five-year deal worth up to $137.5 million, and Kittle, the game-changing weapon who just signed a five-year $75 million contract before the season, is not ideal for a 4-4 squad. It is even less optimal considering Green Bay, New Orleans, Buffalo and Arizona are on the schedule in its next eight games. Nick Mullens came in at quarterback in relief of Garoppolo on Sunday and figures to be the team’s starting quarterback moving forward, while third-year Ross Dwelley and rookie Charlie Woerner will compete for the starting tight end spot in practice this week.