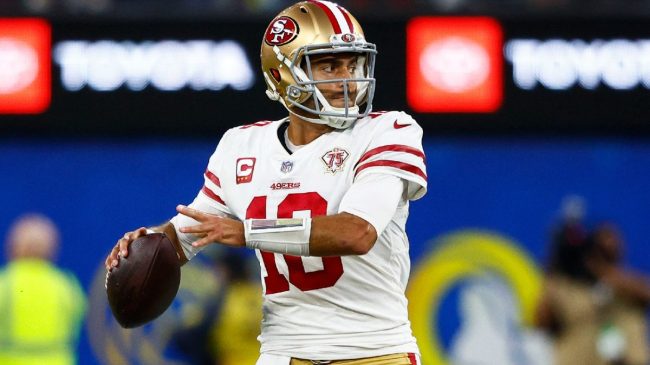 The New Orleans Saints are unsettled at the quarterback position as they prepare for the 2022 NFL Season.

The team could try to bring back one of the two passers to start under center last season. Taysom Hill should be back, and at the moment, it appears the job is his if the season were to start tomorrow.

The other signal caller is Jameis Winston, who played in seven games with the Saints last year, leading them to a 5-2 record. Winston threw for nearly 1,200 yards and 14 touchdowns in those seven appearances, and he’d give the team a viable option in the passing attack.

The thought is that Winston is the player that New Orleans would be most determined to bring back for the start of 2022, but now one new name is being discussed in connection with the quarterback battle.

Saints Looking To The NFC West For QB Possibilities

A name from the West Coast was mentioned this week as a possibility to fill the Saints’ starting quarterback role this Fall.

Jimmy Garoppolo is reportedly an option to land in the Big Easy.

Jameis Winston is the favorite to re-sign with New Orleans and start in 2022, but ESPN reports the Saints could instead trade for 49ers QB Jimmy Garoppolo: https://t.co/NwRFwR4NMP

Garoppolo has been on the trading block all offseason. His name has been mentioned in connection with a number of open jobs this year, so it’s not surprising to see a possible trade for the San Francisco passer as being an option.

Last year, Garoppolo led the 49ers to a 10-7 regular season record before upsetting the Cowboys and top seeded Packers in the NFL Playoffs.

Garoppolo is, however, coming off of shoulder surgery and is unlikely to throw for most of the offseason. His health, along with his asking price could be too much for the Saints to take a chance on.

Still, it is a storyline to follow in the coming months.