Jimmy Johnson Explains Why Mike McCarthy Kept His Job, Dunks On Jerry Jones In The Process 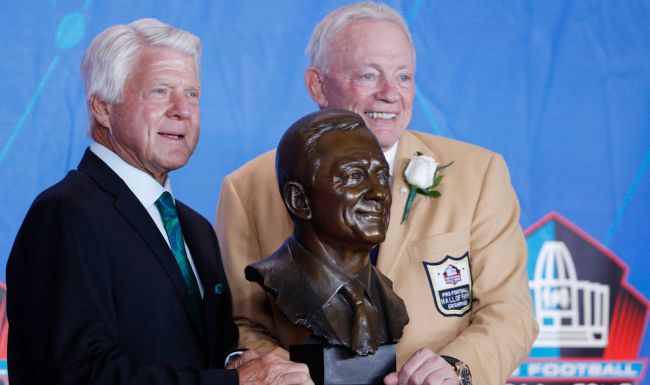 During a recent appearance on The Herd with Colin Cowherd, former Super Bowl-winning Dallas Cowboys head coach Jimmy Johnson explained why Mike McCarthy didn’t get fired following the Cowboys’ loss to the San Francisco 49ers in the playoffs.

According to Johnson — who won two Super Bowl titles in Dallas during his stint as head coach from 1989 to 1993 — it all boils down to owner Jerry Jones’ inability to admit when he’s wrong, which is exactly what he would be doing if he fired McCarthy after just two seasons in charge.

“Jerry doesn’t ever want to admit he’s wrong. He’s going to hang with whoever and try to make it work. I think he really values the talent on the team such that he feels that McCarthy can be successful and he could improve, especially with Dan Quinn and Kellen Moore, with the assistants that he’s got. So that’s a big thing,” Johnson told Colin Cowherd.

“And Jerry is involved — it’s kind of a funny story. See, Jerry really never came out to practice — he’s always trying to pay off the bills, trying to pay off that $140 million loan, so he was always working on that,” Johnson continued. “And the only time he came out to practice in my five years there, he’d come out on the rubber track during the last 15 minutes of practice so he could talk to the media. So, Troy Aikman tells this story, ‘After you left, Barry Switzer came on as coach and I knew things had changed because our first practice, Jerry walked out onto the practice field with a baseball hat and coaching shorts on.'”

"Jerry doesn't ever want to admit he's wrong. He's going to hang with whoever and try to make it work."@JimmyJohnson on Dallas sticking with Mike McCarthy: pic.twitter.com/E160dpdr9V

While Mike McCarthy may have kept his job for now, he’ll certainly be on a tight leash next season as Jones has virtually admitted that defensive coordinator Mike Quinn is waiting in the wings to take over should McCarthy underperform. Should certainly be another fun year in Dallas.