JJ Bleday’s Family Went Absolutely Nuts After He Hit A Homer, Flipping Off Obnoxious Phillies Fans In Their Section 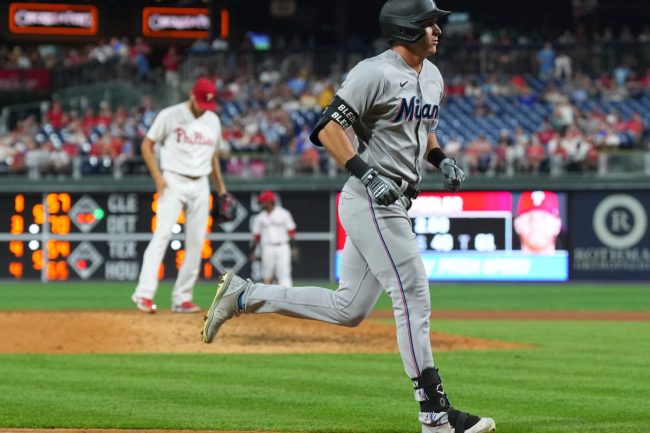 JJ Bleday showed out in front of his family Tuesday night in Philadelphia. The left-handed slugger mashed a laser home run to right field in the Marlins’ 4-1 loss to their NL East rival.

While his team fell short on the scoreboard, Bleday’s supporters got to celebrate with the rookie upon his return to Pennsylvania. A Keystone State native, the rookie was called up to the bigs earlier this season after spending a few years at the minor league ranks. The outfielder was the No. 4 overall pick in the 2019 MLB Draft.

Bleday left Pennsylvania for college, going on to a star-studded career at Vanderbilt. He won a national title with the Commodores and hit 27 home runs in his final season. Now, he’s hoping that success translates to professional ball.

With the lefty back in his home state, the entire Bleday family was on hand to watch from the right field deck. JJ had his own cheering section to witness his solo shot, and they went absolutely nuts when the ball cleared the fence.

And the JJ Bleday section at Citizen Bank Park is going crazy!!!!

The second HR of his career ties the ballgame 🚀@Marlins | #MakeItMiami pic.twitter.com/T5ctc5riAE

Bleday turned on a Zack Wheeler fastball, blasting it 356 feet to the right field bleachers. The ball landed just shy of where his family was sitting, which led the cameraman to focus in on the group.

They were losing it, and for good reason. It’s not often you get to cheer on a family member at the highest level of professional sports.

But upon further review, it looks like the family was not only celebrating Bleday’s blast, but they were also shutting up some obnoxious Phillies fans.

After the group went wild with jubilation, a pair of Philadelphia fans turned around to flip off the excited family members. They gave it right back with a few birds of their own.

Let’s be honest, Philadelphia fans have… um,… earned a certain reputation. They’ve had their own players saying they hate playing in front of their home crowd, so this shouldn’t surprise anyone.

In the end, the Phillies won the game, but not many moments top seeing family or friends smack a Major League home run in their return home.

You love to see it!