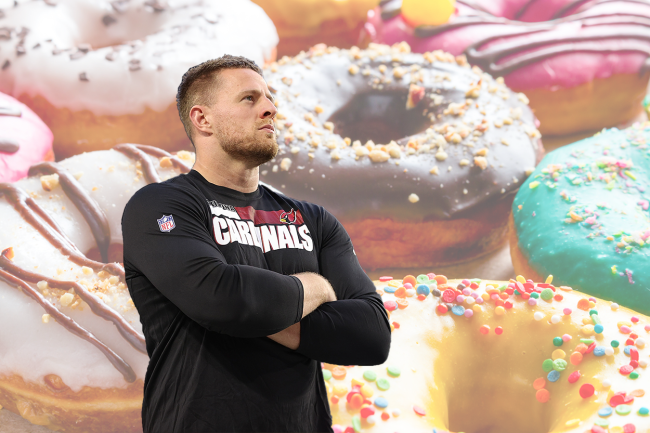 J.J. Watt had an internal dilemma on Friday morning and decided to take it to Twitter for the public to be the judge. The Cardinals defensive end didn’t know how to feel about a certain donut debate he was having with himself and his teammate.

Apparently, according to Watt’s side of the story, Zach Ertz wanted to buy doughnuts for the team’s strength and conditioning coach, as well as his teammates. Before going to the store and purchasing the tasty treat for the team, Ertz allegedly asked Watt if there is any type of doughnut that he prefers.

In response, Watt says that he told Ertz that he likes pink frosted and maple glazed.

“I know I’m pretty much wrong on this one, but that’s why I’m asking the world,” Watt prefaced his story on Twitter. “Yesterday, Zach [Ertz] said, ‘I’m going to bring in doughnuts in the morning for Buddy [Morris], our strength coach, what kind of doughnuts do you like?’ I was like, ‘Wow, that is really nice.’ I’m a big fan of the pink frosted – I think it’s strawberry – and maple glazed.”

When Ertz brought in doughnuts on Friday morning, his box did not include the pink frosted doughnut or the maple glazed that Watt had requested. Now Watt doesn’t know how to feel.

“Shows up this morning [with a] box full of doughnuts, but no strawberry glazed, no maple glazed. I’m extremely grateful for the free doughnuts, but do I have any ground to stand on to be upset?”

Here is how J.J. Watt presented the doughnut question in his own words:

Do I have any ground to stand on here?!

Just like Ertz, the vast majority of people who responded on Twitter understand what he is saying but do not believe Watt has any ground to stand on. He got his free doughnuts, even though they weren’t necessarily his favorites— but the people who like pink frosted and maple glazed the most out of all doughnuts has to be a significant minority, right?