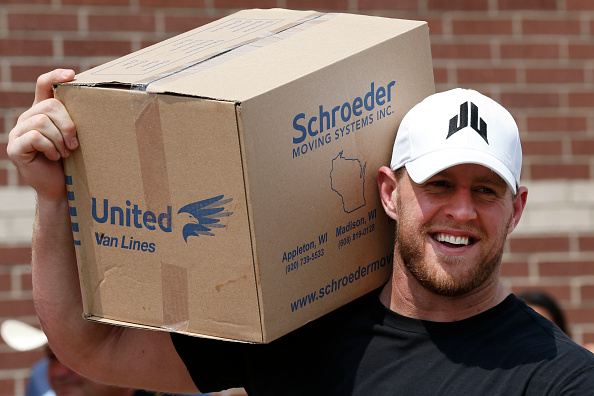 J.J. Watt raised over $37 million for victims of Hurricane Harvey. It has been five months since Hurricane Harvey ravaged the Houston area and there are still many people who are displaced after flood waters destroyed their homes. Watt was happy to help one couple move back into their house that they have lived in for the last 45 years.

The Houston Texans defensive end J.J. Watt raised $37 million posted a video of the Leonard family returning to their hurricane-devastated home. The Leonards had to be rescued twice by boats during Hurricane Harvey. Watt shared the moment that the Leonard family were able to move back into their home and captioned the video: “This moment right here is EVERYTHING!!! This is what you all did. Thank you!!”

“I just want to say thank you to everybody that helping me and my wife get back in our sanctuary,” Leonard says. “Because after 6 months, I’ve learned a lot. By not being in the house … I’ve lived here, I’ve lived there, and it’s nothing like home.” Watt first introduced us to the Leonard family in an Instagram post from November 30, 2017.

Today was the first time since my injury that I had a chance to go out and see first-hand some of the work that is being done with the money that everyone so generously donated to the Harvey Relief Fund. I went and saw a few of the homes that are being rebuilt by SBP after being completely gutted from floor to ceiling (and even the roof). The people and their stories were both heartbreaking and uplifting all at the same time. From Mr. and Mrs. Leonard who have lived in their home for 40 years and had to be rescued by boat (twice!) after the flooding kept climbing higher and higher in their home, to Isela and her family who lost everything but have kept an incredible smile on their face and such an energetic spirit, to Miss Anne who is still in the process of getting her home from the mold damage but hasn’t let that stop her from loving and caring so deeply for those around her and her beloved pets (including a 19 year old chihuahua named Chi Chi and two cats, Andy and Mittens!). Each of these families went through so much devastation and heartbreak, yet remain so positive and energetic, it was truly inspiring to spend time with them today. The work that SBP is doing in rebuilding these houses and helping to get people back in their homes is incredible and thanks to your donations they will be building hundreds of homes over the next two years, each with a story like those great folks and each eager to get back into the comfort and safety of their own home. I also had a chance to visit the Houston Food Bank today, which services over 600 agencies in 18 counties in and around Houston, including mobile pantries that help reach numerous communities. Last year the Houston Food Bank provided over 83 Million meals and they estimated that in the wake of Harvey, their production tripled and it currently remains at double the standard rate and will remain so well into next year. Through Feeding America, your donations have helped to provide countless meals, not only in Houston but all throughout the gulf coast and other affected areas, as well as additional mobile pantries to get food out into the areas that need it. More updates from other sites to come soon!