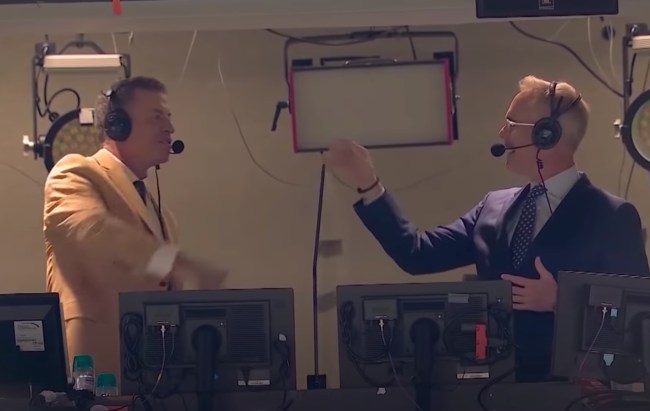 Joe Buck is getting a gold jacket. He will enter the NFL Hall of Fame in Canton, Ohio and join an elite group of individuals, one of whom is Joe Buck‘s own father.

160 nominees for the NFL Hall of Fame’s 2021 class were announced on September 16th. That group of nominees is led by Peyton Manning is a lock for the HoF. But Joe Buck was the first to receive news that he would be inducted into the Pro Football Hall of Fame which makes him and his dad the first-ever Father-Son duo to be inducted. And the best part about the news is how Joe was completely blindsided by it on the Thursday Night Football broadcast with his partner Troy Aikman.

Joe’s been with Fox since 1994 when he became the youngest man ever to announce NFL games at just 25-years-old. Joe will be inducted into the Hall of Fame after winning the Pete Rozelle Radio-Television Award “for longtime exceptional contributions to radio and television in professional football”.

Joe’s lifelong friend Paul Rudd narrated a video where they recap Joe Buck’s illustrious broadcasting career and the seven-time Emmy winner was left speechless after watching the clip on live TV. Here’s that moment when Joe Buck found out he’d be joining his later father, Jack Buck, in the Hall of Fame.

A lot of people shared similar thoughts on Twitter:

Don't get why so many people hate on Joe Buck. He's incredible.

Unpopular Chicago opinion: Joe Buck is awesome at his job and I’m a fan. I hear his voice and I know it’s a big event.

Omggg surprising Joe Buck on air while Paul Rudd narrates it am I crying??????

I’ve been guilty of making weak jokes about Joe Buck at times in the past. There were moments when I didn’t love his World Series broadcast. But I’d still take him calling a game over just about anyone in the business 99 times out of 100. The man is a professional through and through and he was gifted with a near-perfect voice for broadcasting.

You can’t help but be happy for Joe Buck. He deserves this.