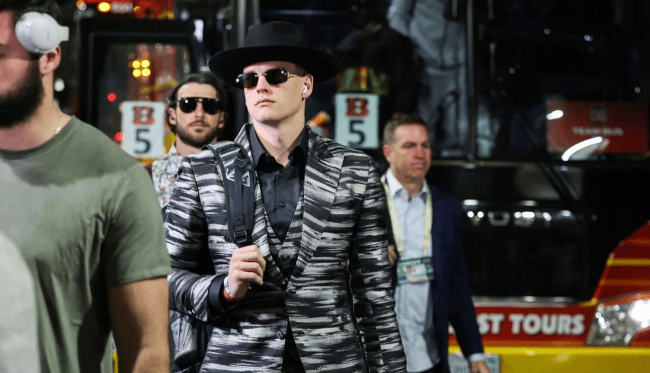 Cincinnati Bengals fans’ hearts were in their throats after seeing their franchise quarterback Joe Burrow on the ground grimacing in pain and holding his knee during the Super Bowl.

Early in the fourth quarter of Sunday’s loss, Burrow was sacked by Rams Von Miller. As he was going down, Burrow’s right leg got twisted in an awkward manner. Immediately, the quarterback screamed with a very pained look on his face as he grabbed his right knee.

Joe Burrow hurt his knee and limped off the field after a sack. pic.twitter.com/nMNts94BvV

Many fans feared the worst, especially after Burrow had his excellent rookie season end early in 2020 due to a torn ACL and MCL in his left knee.

After limping off the field, Burrow was thankfully able to return to the game on the Bengals’ next drive.

That scarry Play Where Joe Burrow Went down Grasping His Knee

Following the Super Bowl, Burrow said that his right knee “feels good” and that no matter how bad it was he “wasn’t coming out” of the game.

So it was good to see Burrow walking out of the stadium (in his amazing pre-game fit) without any aid.

Joey B headed out of the stadium.

Cincinnati Bengals fans were also very relieved to see that, after a change of clothes, Joe Burrow’s right knee was feeling so good that their star QB was able to do a little dancing on stage with his favorite pre-game artist Kid Cudi.

In the lead-up to the Super Bowl, Burrow had said he strictly listens to fellow Ohio native Kid Cudi before games.

Who does @JoeyB listen to pregame?

After the performance, Kid Cudi wrote on Twitter, “Performed at the Bengals after party w Joe and the boyz. He made the set list. All his favorite Cudi jams. We all had some fun tn. Sent them off w a lot of love. Congrats on an epic season fellas!! We back next year! #WhoDey #Bengals.”

Related: Kanye West Cuts Off Kid Cudi And Removes Him From Album Because He’s Friends With Pete Davidson

One has to assume that the set list Joe Burrow made was intended to be for a Super Bowl victory party, but seeing their superstar quarterback being able to move around comfortably on stage with Cudi was a big win in itself for fans of the Bengals and Joe Burrow.