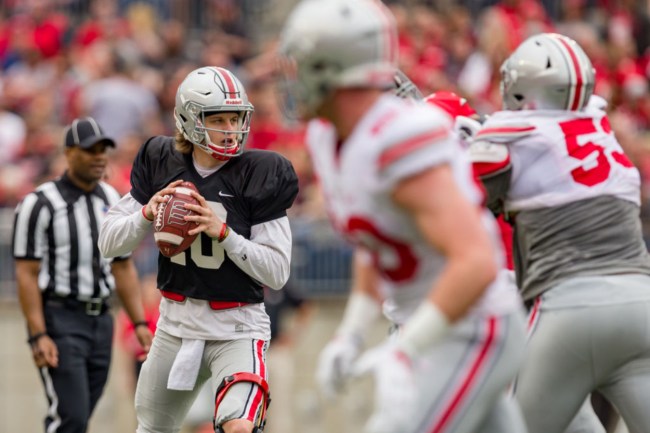 Joe Burrow simply could not find the field during his time at Ohio State. Things turned out pretty well for him once he left OSU for LSU, but he certainly faced adversity when he was a Buckeye.

In fact, things got to a point where Burrow thought about quitting football entirely. How serious those thoughts were is unknown, but he recently admitted he did look outside of football for a possible career.

Burrow recently did an interview with former NFL quarterback Chris Simms and touched on how it was being a backup for three seasons at Ohio State. The Cincinnati Bengal gunslinger said that he thought he was playing well enough at practice to go out and make plays as a starter at Ohio State, but that didn’t happen.

It got to a point for Burrow that he began thinking of “updating his resume.”

“Of course there was self-doubt in that moment,” Burrow admitted.

“When you don’t pay for three years, and you’re putting in the work and you feel like you’re practicing really well and you feel like you can go out there and make plays and do what you’ve always done but you’re not getting the opportunity to show what you can do, it’s frustrating.”

“There were times when I started updating that resume, thinking about being an investment banker, or something like that.”

Burrow probably would’ve done well as an investment banker, but it’s safe to say he made the right career choice in sticking with this whole football thing.

He put together what is arguably the greatest college football season ever when he took the starting job at LSU and is fresh off leading the Bengals to a Super Bowl appearance.