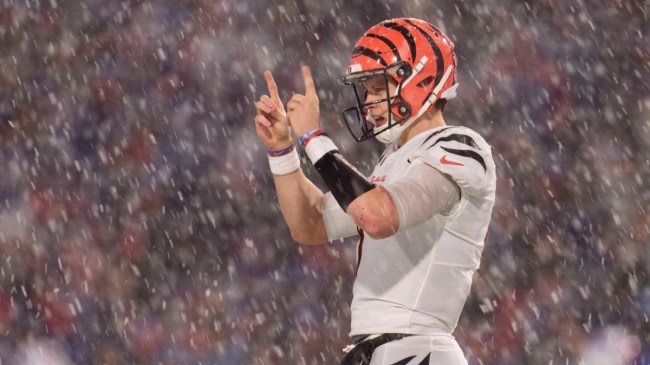 Cincinnati Bengals cornerback Joe Burrow has been on such a tear this season that there’s now a legitimate conversation surrounding whether or not he’s the best quarterback in the league.

Part of what makes Burrow so special — other than his obvious on-the-field throwing talent — are his intangibles. Truly the second coming of “Joe Cool”, Burrow has an effortless confidence that undoubtedly rubs off on his teammates. How could you see him pull things like this off in warm-ups and not have complete faith in him?

This is tough 🥶 (via @nfl) #nfl #bengals #burrow #joeburrow

Perhaps unsurprisingly, Burrow was certainly feeling himself during the Bengals’ 27-10 beat down of the Buffalo Bills, as one of the Inside The NFL mics caught Burrow proclaiming “I’M HIM!” — which was popularized in the NFL by Stefon Diggs earlier this year — after he threw a touchdown pass to Hayden Hurst.

As a result of their win over the Buffalo Bills, Joe Burrow and the rest of the Bengals — the defending conference champions who have won ten straight games and haven’t lost since October — will head down to Kansas City to take on Patrick Mahomes and the Kansas City Chiefs in the AFC Championship game (the Bengals are currently favored by 1.5 points).

According to some NFL analysts, if Burrow and the Bengals best the Chiefs in the AFC title game for the second straight year, Burrow will take Mahomes’ crown as the best quarterback in the NFL.

Over in the NFC side of the bracket, rookie sensation Brock Purdy and the San Francisco 49ers will be heading to Philly to take on Jalen Hurts and the #1 seed Philadelphia Eagles, who are favored by 2.5 points. The NFC championship is scheduled for Sunday, January 29 at 3 p.m., with the AFC Championship game set for later that evening.