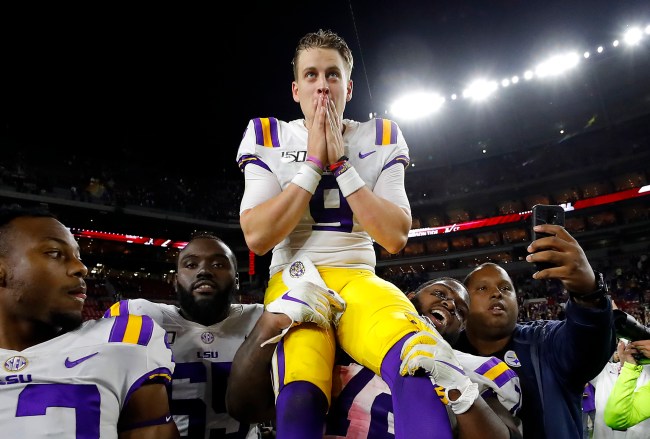 The best player in college football and the eventual number 1 pick in the NFL Draft could have been working at GameStop post-graduation if he just had done just what was expected of him.

Burrow played in just 10 games as the backup to J.T. Barrett at Ohio State and surgery on a broken bone in his throwing hand in August 2017 sent him even deeper into obscurity. When OSU decided to put its horses behind  Dwayne Haskins, the eventual Heisman Trophy winner was met with laughable offers on the transfer market from teams that should know better.

During an appearance on Bleacher Report’s “The Lefkoe Show” on Monday, Burrow and his tiny hands sounded personally offended by an offer from Nick Saban to be the Crimson Tide’s zillionth string quarterback.

When Joe Burrow was transferring from Ohio State, schools were offering him their third-string jobs.

"You guys must not know about me yet."

“When I was transferring from Ohio State, I was third on the depth chart as a junior coming off a broken throwing hand. Not a lot of people really wanted anything to do with me. People like Alabama were calling and wanting me to be their third string quarterback. And I was like, ‘me? You guys must not know about me yet.'”

As a senior at Athens High School in Ohio, Burrow was awarded the state’s Mr. Football and Gatorade Player of the Year after the four-star recruit posted career numbers of 11,416 yards and 157 passing touchdowns while rushing for 2,067 yards and 27 rushing touchdowns.

He was also named first-team All State as a point guard for Athens hoop team. He still strokes.