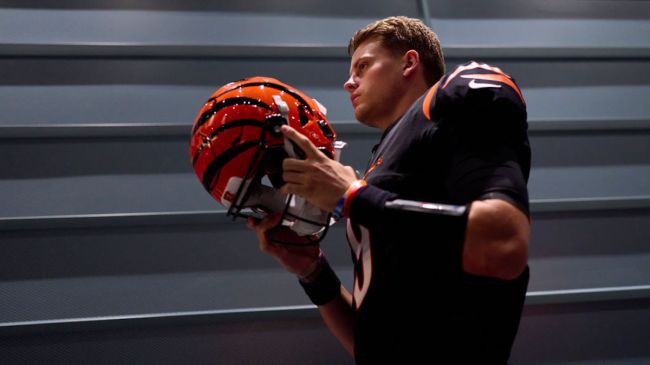 While Joe Burrow hasn’t openly admitted to traveling to South America to take hallucinogens, he did follow in Aaron Rodgers’ footsteps when speaking to reporters about the Cincinnati Bengals’ disappointing 0-2 start.

Channeling Rodgers’ famed “R-E-L-A-X” speech from a few years back (Editor’s note: upon further review, Rodgers made these comments back in 2014 — WOW time flies), Burrow said that “let’s all just take a deep breath and relax,” when asked about the team’s current level of frustration.

Joe Burrow on the Cincinnati Bengals’ 0-2 start: “Let’s all just take a deep breathe and relax”

“It’s frustrating for me overall,” Burrow said of the Bengals’ slow start. “Not just myself. Everyone is frustrated. Like I said, we’re not panicking. We’re two games in and we’ve got 15 games left. Let’s all just take a deep breathe and relax. We’re going to be fine. We’re not worried about it.”

"Let's all just take a deep breath and relax. We're not worried about it." pic.twitter.com/lmcOU9lSrH

The Bengals, who lost last year’s Super Bowl to the Los Angeles Rams by just three points, opened the season with a loss to the Pittsburgh Steelers and then followed that up with a defeat at the hands of the Cooper Rush-led Dallas Cowboys.

Burrow and the Bengals will look to get their first win of the 2022 season when they head to New Jersey to take on the New York Jets on Sunday. Luckily for the Bengals, the rest of the AFC North — the Pittsburgh Steelers, Cleveland Browns, and Baltimore Ravens — all have a record of 1-1, meaning they’re only one game back of the division lead with plenty of games left to play in the season.

At this time, with current odds of about +3000, the Bengals aren’t even one of the Top 10 betting favorites to win the Super Bowl and are trailing the likes of the Baltimore Ravens and San Francisco 49ers.

RELATED: Aaron Rodgers Talks Packers’ Ayahuasca Celebration, Says He’ll Do It Again If It ‘Calls’ To Him