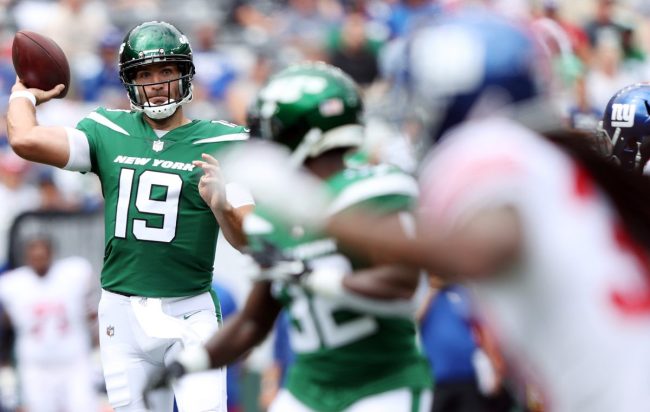 The New York Jets are gearing up for the 2022 season. They’ll begin that campaign with an opener against Super Bowl contender Baltimore at home.

The team got some bad news over the preseason with quarterback Zach Wilson getting injured. The setback is expected to keep him out for Week 1, and possibly longer, depending on the recovery process.

With Wilson likely out, veteran Joe Flacco will step in.

Jets head coach Robert Saleh seems confident in Flacco’s abilities as the season nears, saying that he believes the passer is a starting quarterback in this league. After all, he did win a Super Bowl with the Ravens in the not-so-distant past, taking home MVP honors in that win.

But just as quickly as Saleh built up the hopes of Jets fans for Week 1 with Joe Flacco under center, the signal caller tore them down.

Flacco threw an awful pick six to Giants defender Austin Calitro in the Jets’ final preseason game. It has brought New York fans back down to earth following an offseason of hope.

The chances of winning that season opening matchup against Flacco’s old team, the Ravens, certainly seem slim if the quarterback makes throws like this.

The immediate reaction to Flacco’s pick six was not kind to the veteran.

Yeah, I wasn't buying all those glowing camp reports about Joe Flacco. He threw that one right to ball magnet Austin Calitro, who takes the interception back for a touchdown.

Jets are like… we don’t need Jimmy. We have Joe Flacco. 🥸 https://t.co/doOQM0SnWO

Joe Flacco with one the worst passes I’ve ever seen for a pick 6 right in front of me.

It could be a long season for the Jets with quarterback play like this. For fans, Zach Wilson can’t return to the field quickly enough.