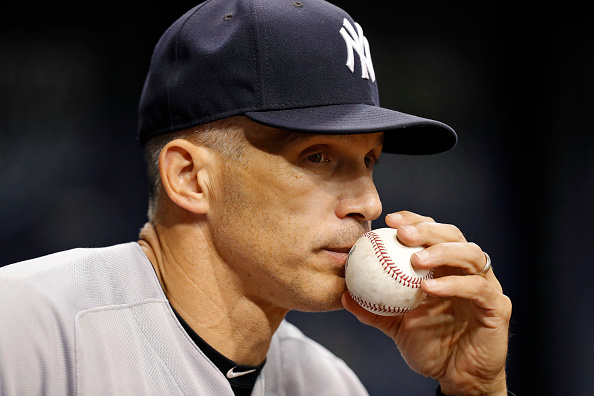 ST. PETERSBURG, FL - SEPTEMBER 22: Joe Girardi #28 of the New York Yankees watches during the seventh inning of a game against the Tampa Bay Rays at Tropicana Field on September 22, 2016 in St. Petersburg, Florida. (Photo by Mike Carlson/Getty Images)

After an unforgettable and exciting 2017 season where the New York Yankees enjoyed a baseball renaissance in the Bronx, Joe Girardi is out as manager. On Thursday morning, Girardi made the announcement that he would not be back with the Yankees, a team that he had guided for nearly a decade.

“With a heavy heart, I come to you because the Yankees have decided not to bring me back,” Girardi said in a statement on Thursday. “Finally, I’d like to thank the Fans for their great support as a Player, Coach and Manager and the lasting memories of their passion and excitement during the Playoff Games, especially the final six games which will remain in my heart forever,” Girardi said.

“I want to thank Joe for his 10 years of hard work and service to this organization. Everything this organization does is done with careful and thorough consideration, and we’ve decided to pursue alternatives for the managerial position. As Hal Steinbrenner and I mentioned to Joe directly this week, he has been a tremendous Yankee on the field and away from it, as a player, coach and manager. He has a tireless work ethic, and put his heart into every game he managed over the last decade. He should take great pride in our accomplishments during his tenure, and I wish Joe and his family nothing but success and happiness in the future.”

The 53-year-old former MLB catcher, who played in the big leagues for 15 years, became the skipper for the Yankees in 2008. He ends his career in pinstripes with a 910-710 managerial record and was at the helm when New York won the World Series back in 2009. Last week, Girardi and the Yankees were only one win away from making it to the 2017 World Series. He also played for the Yanks from 1996-1999, where he helped the team win three World Series titles.

Girardi’s four-year, $16 million contract was set to expire at the end of the month. Girardi’s statement sounds like the divorce was not mutual, but rather the team’s decision to not renew his contract. There was rumored to be conflicts between Girardi and the front office this season. Cashman’s contract was also up this year, and there may have been a “he goes or I go” ultimatum.

there has been tension between girardi/front office this year. it appears to be more yankees' decision, than girardi's.

As for possible replacements for Girardi, they Yankees may look at candidates such as Mets hitting coach Kevin Long, who was the Yankees’ hitting coach from 2007-2014; Yankees bench coach Rob Thomson; and former Philadelphia Phillies manager Pete Mackanin, who was a former scout for the Yankees.