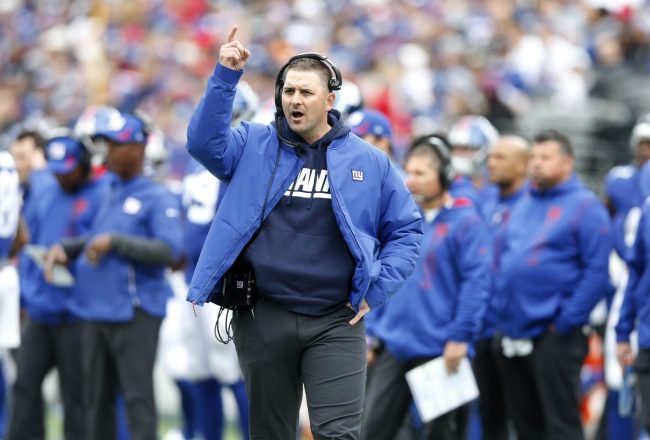 Joe Judge is allegedly not just a bad coach, but a bad neighbor. The 40-year-old former head coach of the New York Giants was fired on Tuesday, just 10 days after being accused of being unfriendly.

Judge signed a five-year, $5 million deal when he took over the team in 2020 and will be paid out accordingly, so it could be worse. To cope with his firing, he had an insane amount of beer and pizza delivered to his home in New Jersey.

His neighbors will likely not be getting any.

On the first day of the new year, a Rutgers fan who claims to be Judge’s neighbor said that he is not particularly gregarious. Apparently, the man lives two doors down from Judge in Franklin Lakes.

He says that upon Judge moving-in, he and his family walked over to greet their new neighbor with cookies. Despite them being home, the man claims that neither Judge nor his family came to the door.

In turn, the man and his family left the cookies on the front porch with a note that offered their phone number if Judge needed anything. He did not reply.

While that may not seem like a big deal, because it probably isn’t, Judge’s neighbor took offense.

He also decided to let us know, completely unprompted, that the neighborhood in which they live is an oval. While out jogging one day, he waved at Judge. Judge did not wave back.

The man is not sure whether Judge is shy, or what the deal is, but he says that he is not friendly.

Here is what Judge’s neighbor had to say: 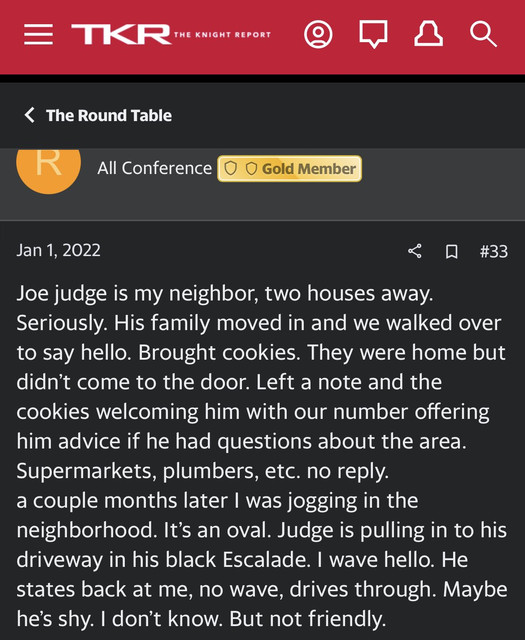 There is a lot to break down here.

For starters, if I was the new head coach of the New York Giants and somebody knocked on my door while I was moving in, I would probably be hesitant to open the door as well. Secondly, this man sounds like he is super salty that the head football coach of the New York Giants did not want to be his friend, and is probably so bummed that Judge is no longer in his role. He clearly loves telling people that Judge is his neighbor.

Thirdly, and perhaps most importantly, Judge deserves some credit where credit is due here. He is not acting much differently than everybody else in that part of the country. His lack of friendliness is pretty par for the course in the tri-state area.

Also, why is the oval detail necessary? I am grateful that he shared, because it’s hilarious, but the shape of the neighborhood adds no value to the story.

Don’t expect the message board poster to get an invite to the beer and pizza-fueled pity party. Judge is clearly uninterested.