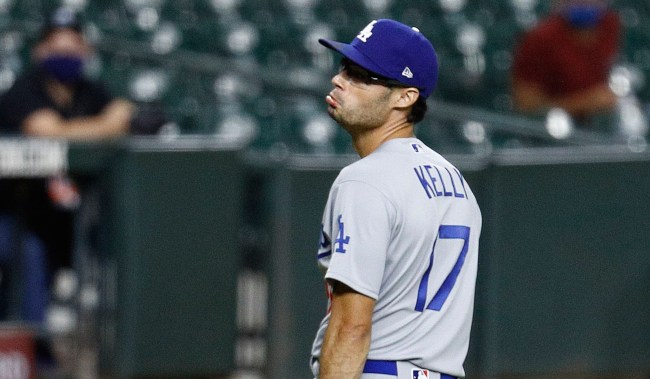 For some strange reason, Houston Astros pitcher Lance McCullers keeps trying to defend his cheating teammates despite the fact that every time he does he ends up taking a gigantic L.

Following Los Angeles Dodgers pitcher Joe Kelly throwing at a couple of McCullers’ teammates, then getting suspended for it, Kelly appeared on The Big Swing podcast with his teammate Ross Stripling and continued to rip Astros players for what they did and how they have handled it.

“The people who took the fall for what happened is nonsense,” Kelly told Stripling. “Yes, everyone is involved. But the way that was run over there was not from coaching staff.

“When you take someone’s livelihood … to save your own ass, that’s what I don’t like,” said Kelly. “Cheating? They cheated. Everyone knows they’re cheaters. They know they’re cheaters. It’s over. That’s been there, done that. But now they mess it up by ruining other people’s lives, so they f—ed it up twice. … When you taint someone’s name to save your own name, this is one of the worst things that you could probably do. … That really friggin’ bugs me. I think I’ll be irritated forever.”

He’s not the only one.

Hey @TeamCJCorrea if you want these hit me with a shipping address, I got you 👊🏻 pic.twitter.com/GwSkiOcwMV

McCullers, during an appearance on the Starkville podcast, fired back at Kelly, claiming he doesn’t know what he’s talking about.

“These (opposing) players have no idea what this investigation was like. They have no idea the lengths that the MLB went to beyond speaking to players.” said McCullers. “Actually, speaking to players was probably the least part of their whole investigation. I can’t go into it because I don’t know how much I am or am not allowed to say. But I’ll say that … the notion that, oh, players negotiated immunity, players then were interviewed and rolled on everyone just to save themselves, isn’t the case. And that’s as much as I can say. That’s not what happened. That’s not how this went down. So if that’s what people are upset about, then I guess we can all move on because that’s not how it happened.”

McCullers also insinuated that Kelly was afraid of Carlos Correa, which is why he kept “social distancing” from him when the benches emptied.

“I mean, Joe was scared. Carlos isn’t the right dude to mess with,” said McCullers.

Well, that was all Kelly’s wife Ashley needed to hear, because on Wednesday she clapped back at McCullers in glorious fashion on her Instagram Story.

“You, McMuffin,” wrote Ashley. “Anyone who knows or has played with the ‘skinny motherf–ker” would know that he would attempt to take on a 300lb offensive lineman knowing that he would lose. He’s not afraid of anyone … especially your pal (who honestly has a nice swing).”

Excuse me, I'm currently dying at the "mcmuffin" word use by Ashley Kelly. Help. pic.twitter.com/b6lJh143LB

“McMuffin…” She called him McMuffin.