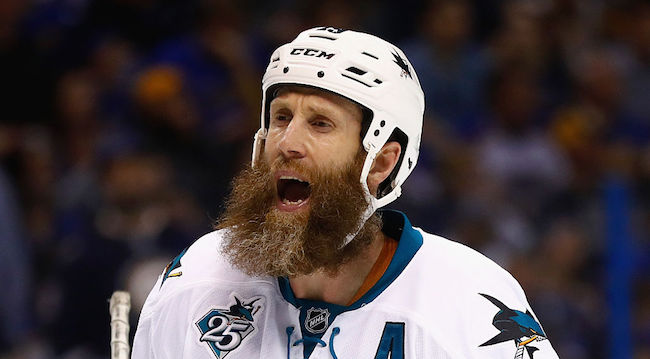 I’ve never been able to totally understand why, but hockey fans seem to have an obsession with hair more than the supporters of any other sport in the world— and I can’t really say I blame them. There aren’t many traditions better than the annual Minnesota State High School All Hockey Hair Team, and there’s something oddly entertaining about tracking the evolution of playoff beards over the course of the postseason.

Plenty of NHL players sport some serious facial hair, but I don’t know if anyone comes close to topping that of San Jose Sharks center Joe Thornton. Thorton started to let his beard grow after the NHL season kicked off in 2015— presumably after watching Jumanjii and thinking, “Say, that Robin Williams guy might be onto something.” He’s continued to let it ride since then and it’s now reached a point where he resembles every single homeless guy to warm himself next to a flaming barrel in a movie.

While it might ever so slightly numb the pain of getting hit in the chin by a puck, there isn’t really any competitive advantage to having a beard that big, and after an incident that occurred last night, Thorton might regret letting his facial hair grow to the point that it has.

During the opening faceoff of the Sharks game against the Maple Leafs on Thursday night, Thorton exchanged multiple slashes with Toronto’s Nazem Kadri. The two were kicked out of the circle and decided to settle their differences by dropping their gloves almost immediately after the puck hit the ice.

Kadri went to grab Thorton’s jersey but inadvertently got a handful of beard, and it wasn’t just the two men who ended up falling on the ice after exchanging blows.

Kadri literally drops a handful of Thornton's beard on the ice after the fight. Ew. pic.twitter.com/Ncgprzax0G

The chunk eventually ended up in the glove of backup goalie Aaron Dell, who will hopefully embed it in resin so it can be appreciated by generations to come.

If this incident somehow sparked a thirst you can’t seem to quench, you might enjoy this supercut of NFL players getting tackled by their hair.